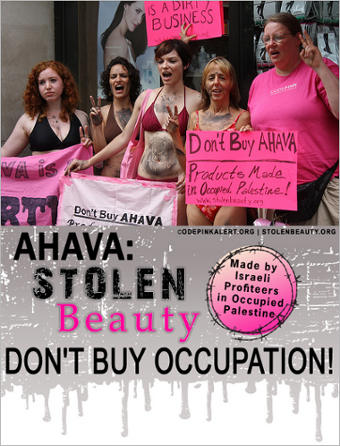 DaitoCrea, Japanese agent of the Israeli cosmetics firm, AHAVA, announced on their Webpage that it has ended all sales of AHAVA products for what it attributed to “financial reasons”. Boycott movement said that decision is the outcome of direct action and protests.The company stopped all AHAVA sales starting on January 31, 2012. The victory was that of the persistent efforts of a 2-year campaign conducted by the BDS (Boycott, Divestment and Sanctions) that calls for boycotting all Israeli products made in Israel’s illegal settlements in occupied Palestine.

The Forum added that its activists informed the firm, by direct action and advocacy, of the illegality of AHAVA goods and the suffering it inflicts on the Palestinian people.

AHAVA – Israel products are made in a settlement in the occupied Palestinian West Bank; settlements are illegal under International Law.

AHAVA uses Dead Sea minerals and resources while the Palestinians are kept the Dead Sea out of the area due to Israel’s illegal policies.

The campaign informed the distributer that AHAVA labels their products as “Made In Israel” while in fact it is made in an illegal Israeli settlement in the occupied territories.
In May 2010, the campaign held a meeting with officials of the Japanese Ministry of Foreign Affairs and they stated that in is not appropriate for AHAVA to labels its goods as made in Israel while they are made in a settlement.

In 2010, the MUJI beauty products in Japan decided to cancel its plans to open stores in Israel for what they described as “financial reasons”. The BDS movement said that the decision was made after a seven-month campaign against opening the store.

THE BDS movement in different parts of the world is active on different levels, including the boycott of Israeli settlements goods, information about the illegal Israeli occupation, and on cultural and intellectual levels to raise awareness on the Israeli violations against the Palestinian people.

These violations affect every aspect of the life of the Palestinians, and deprive them from their rights in their homeland and their right to their natural resources.