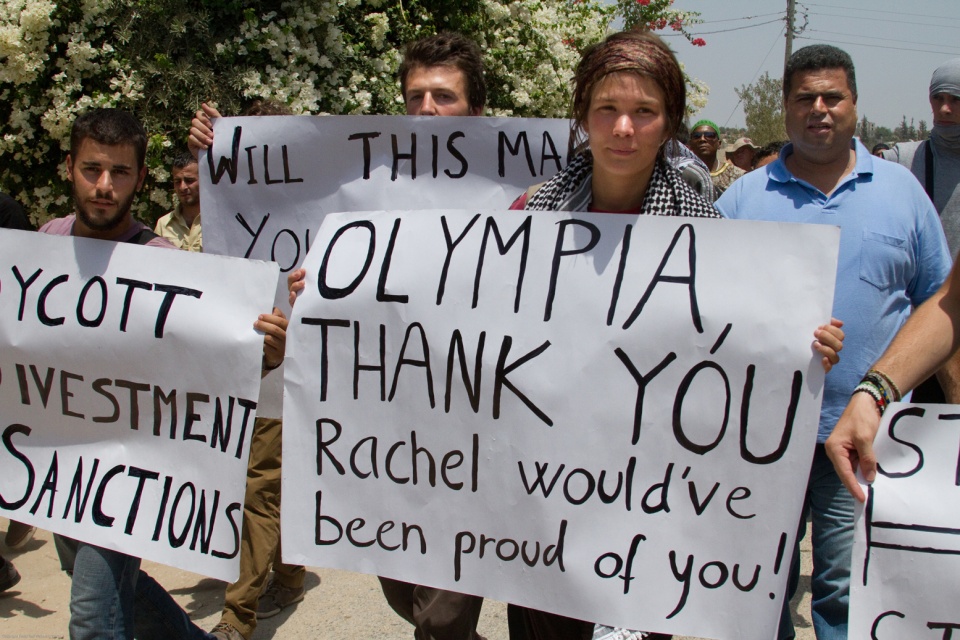 A Washington State court has dismissed a lawsuit brought against current and former members of the Olympia Food Co-op board of directors for their decision to boycott Israeli goods, calling it a SLAPP – Strategic Litigation Against Public Participation – and ruling that the court would award the defendants attorneys’ fees, costs, and sanctions. The judge also upheld the constitutionality of Washington’s anti-SLAPP law, which the plaintiffs had challenged.In a court hearing last Thursday, lawyers from the Center for Constitutional Rights (CCR) and Davis Wright Tremaine LLP argued that the court should grant the defendants’ Special Motion to Strike and dismiss the case because it targeted the constitutional rights of free speech and petition in connection with an issue of public concern.

“We are pleased the Court found this case to be what it is – an attempt to chill free speech on a matter of public concern. This sends a message to those trying to silence support of Palestinian human rights to think twice before they bring a lawsuit,” said Maria LaHood, a senior staff attorney with the Center for Constitutional Rights.

“We’re thrilled that the court saw fit to protect the board’s right to free speech. This decision affirms the right to engage in peaceful boycotts without fear of being dragged through expensive litigation,” said Bruce E.H. Johnson of Davis Wright Tremaine LLP, who drafted Washington State’s Anti-SLAPP law.

Also at the hearing on Thursday, the court denied plaintiffs’ motion for discovery, which sought to depose defendants and obtain documents. The defendants’ attorneys had argued that lengthy depositions and voluminous document production is precisely the type of burden the anti-SLAPP statute was intended to prevent. Before the case was filed, the plaintiffs sent the co-op board members a letter indicating that plaintiffs would bring a “complicated, burdensome, and expensive” legal action if the co-op did not end the boycott.

“Today’s victory is not only for the Co-op, but one for free speech,” said Jayne Kaszynski, spokesperson for the Olympia Food Co-op, and one of the defendants in the case. “We look forward to returning all of our energy to the Co-op’s mission.”

SLAPPs are lawsuits that target the constitutional rights of free speech and petition in connection with an issue of public concern Although many cases that qualify as SLAPPs are without legal merit, they can nonetheless effectively achieve their primary purpose: to chill public debate on specific issues. Defending against a SLAPP requires substantial money, time, and legal resources, and can divert attention away from the public issue and intimidate and silence other speakers.

Washington State’s Anti-SLAPP statute was enacted in 2010 to deter such lawsuits.
The boycott is part of a global Boycott, Divestment and Sanctions (BDS) movement against Israel for what boycotters say are violations of international law and the denial of Palestinian human rights.

The lawsuit seeks to prevent enforcement of the boycott policy and to collect monetary damages against the 16 past and current board members. The case was filed by five co-op members, purporting to bring the suit on behalf of the co-op itself, which has approximately 22,000 members.

The Olympia Food Co-op is a nonprofit corporation that was formed in Olympia, Washington in 1976. The co-op seeks to make good food accessible to more people while encouraging economic and social justice, and it has a long history of social justice work. In 2010, the board passed a resolution by consensus to boycott Israeli goods.

The Center for Constitutional Rights is dedicated to advancing and protecting the rights guaranteed by the United States Constitution and the Universal Declaration of Human Rights. Founded in 1966 by attorneys who represented civil rights movements in the South, CCR is a non-profit legal and educational organization committed to the creative use of law as a positive force for social change.

– For more information regarding this press release contact: press@ccrjustice.org