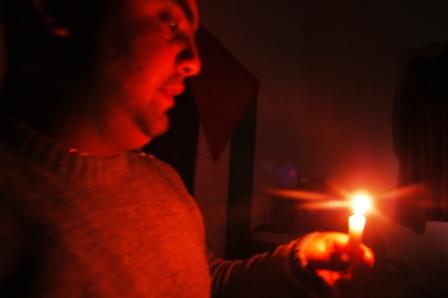 Palestinian officials told IMEMC on Tuesday that the lack of fuel has caused the only Power Plant in Gaza to go offline for the second time in two weeks; blackouts could reach up to 13 hours day in some areas of the Gaza Strip. Ahamad Abu Al Amrien, the information officer of the Energy Authority in Gaza, told the IMEMC that the power plant was taken offline because fuel ran out. He added that the Authorities in Gaza are waiting on Egypt to send the need fuel into Gaza via the Rafah border terminal.

Last week, Cairo agreed to supply Gaza with all the needed fuel supplies, and to increase the supply of electricity to Gaza.

In ideal conditions, Gaza needs 310 Megawatt of electricity a day, but since the Israel imposed the siege on Gaza in 2007, the coastal region started getting only 120 Megawatts which comes from Israeli and Egyptian power lines, while Gaza Power Plant only produces 80 Megawatts.

Abu Al Amrien explained that parts of Gaza will now go dark for 13 hours a day. Water and sanitation filters will be impacted by electricity outages.

Since the Israeli siege was enforced on Gaza, it became dependent on the fuel coming via underground siege-busting tunnels at the border with Egypt.

The fuel crises increased in recent weeks due to Egyptian army crackdown on the tunnels. Today, Egyptian security forces stopped 7,000 litters of fuel en-route to Gaza via those underground tunnels.