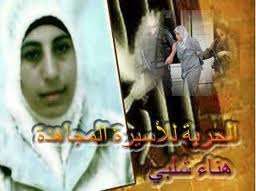 The Israeli Prison Administration prevented, Saturday, a medical committee from visiting hunger-striking detainee, Hana’ Yahia Ash-Shalabi, 30, who has been on hunger-strike for the eighteenth consecutive day protesting humiliation and illegal Administrative Detention policy.In a press release issued Sunday morning, the Palestinian Prisoners Society reported that the prison administration at the Ha-Sharon Prison prevented the medical team from visiting Ash-Shalabi to examine her. The committee consists of Palestinian and International health care professionals.

The committee said that it decided to visit Ash-Shalabi after the prison administrations refused to have her examined, or even moved to hospital due to the deterioration in her health condition.

The Committee held Israel fully responsible for the life of Ash-Shalabi, and demanded the International Red Cross to send its medical teams in order to examine her.

The Ofer Israeli Military Court will be looking into the case of Ash-Shalabi on
Sunday, to discuss the “secret file” submitted by the military prosecutor against her. Secret files used against political detainees are not accessible to the detainees or their lawyers.

Lawyer Jawad Boulos of the Palestinian Prisoners Society, stated that there will be no more court sessions, and that the Military Court could issue its ruling on Sunday, or the coming few days.

The court session to announce the verdict will be held with the participation of Israeli security officials, the prosecutor and the Judge; defense attorneys are denied access to such sessions.

Boulos said that the defense committee filed an appeal demanding her immediate release after refuting all claims filed by the prosecution regarding the alleged planning for “attacks against military targets”. The prosecution insists on the presence of a “secret file” against her.

It is worth mentioning the Islamic Jihad in Palestine stated that two of its members, imprisoned by Israel, have been holding hunger-stroke since seven days in solidarity with Ash-Shalabi.

The two, Bilal Thiab and Thaer Halahla, said that they are striking in solidarity with Hana’, and to demand Israel to end its illegal Administrative Detention policy.

Speaking to the IMEMC on Thursday, Yahia Ash-Shalabi, the father of Hana’, stated that his daughter lost a lot of weight, and that she can barely stand due to a decline of her health condition.

“Hana’ is losing a lot of weight; she can barely stand. I hold the Egyptian mediators of the prisoner-swap deal responsible for the well-being of my daughter”, Yahia told the IMEMC from the protest tent outside his home in the village of Borqeen.

Ash-Shalabi was released last October after spending two years under Israeli administrative detention. Her release came as part of the Egyptian mediated prisoner-swap deal between the Palestinian resistance and Israel.

Israel uses Administrative Detention to hold Palestinians without charges; such rulings are frequently renewed mounting to months, and in many cases, to years behind bars.