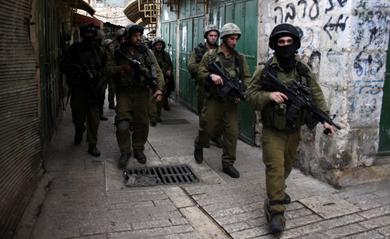 Israeli soldiers invaded, on Sunday at dawn, the northern West Bank city of Jenin, the Jenin refugee camp, and a number of nearby areas, broke into and searched several homes; no arrests were reported.Local sources reported that more than ten Israeli military vehicles invaded Al-Jaberiyyat neighborhood, in Jenin, and broke into a residential building before using its rooftop as a monitoring post. The building has a direct view of the alley of the Jenin camp.

Troops broke into several homes in the building and held the residents in one room until morning hours.

The sources added that troops also invaded several neighborhoods in the Jenin refugee camp, and roamed in its alleys, and withdrew by early morning hours.
The army also invaded the towns of Qabatia, Az-Zababda, and Ash-Shuhada’ Junction; no arrests were made.

In related news, soldiers handed two youths from Al-Khader town, near Bethlehem, military orders demanding them to head to the nearest security base for interrogation.

Local sources in Al-Khader stated that soldier broke into the home of late Suleiman Ashour, near the Solomon Pools, violently searched the property and attacked his daughter, who is a former political prisoner, before handing his son, Maseed, 38, a military order to head to the Etzion military and security base for questioning.

Resident Ayman Salah, 25, was handed a similar order after the army broke into his home.