Two Women, One Child, Kidnapped During Visitation At Ramon Prison 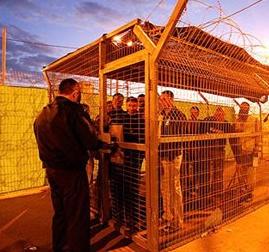 The Palestinian Prisoners Society (PPS) reported Sunday that Israeli soldiers kidnapped two women and one child while visiting family members held at the Ramon Israeli Prison.The PPS said that Dayala Mustafa Matar, 26, her brother Sa’ad, 15, were taken prisoner while visiting their brother, Mohammad, who has been imprisoned since 2003 and is serving a life-term.

Also, soldiers kidnapped Yosra Adel Qa’daan, 30, while visiting her brother Sa’ed, who has been imprisoned since 2003, and is serving a 25-year term.

Their families appealed to human rights groups and the International Red Cross to intervene, and force the Israeli Authorities to release those who were abducted Sunday.

Eyewitnesses told the PPS that the soldiers used force against the families trying to visit their detained loved one and canceled all visitations for the day.