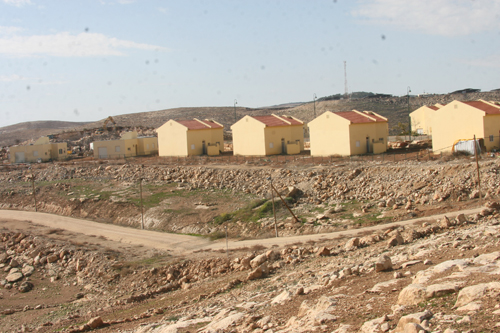 The Israeli Higher Planning Council, running under the Military leadership in the occupied West Bank, accepted an appeal against a construction plan for a new Israeli settlement, south of the southern West Bank city of Hebron, the Arabs48 news website reported.Two Palestinian lawyers, Ghayyath and Qais Nasser, filed an appeal against an Israeli build to build a new settlement, named Sensana, on privately owned Palestinian lands that belong to residents of Thahiriyya town, south of Hebron.

After reviewing the case, the Planning Council decided to accept the appeal, and cancelled the plan. The two lawyers said that this unprecedented ruling by a military court is an important legal victory.

The new settlement plan aimed at the construction of 170 units, yet it left the opportunity open for constructing a total of 450 units at a later stage.

The area where this settlement was planned to be built was illegally taken over by a group of armed extremist settlers who installed an illegal outpost. A significant part of this outpost is installed on privately owned Palestinian lands, owned by members of Harb family in Thahiriyya.

The outpost was regarded as illegal under Israeli law and had no planning structure. Representing the Harb family, lawyers Ghayyath and Qais filed an appeal arguing that this plan violates both Israeli and International Laws.

At first, Israel decided not to build on the lands in Question, but the Military Government in the occupied territories approved plans on nearby lands.

The Eshkol Regional Council of Hebron Settlements claimed that the plan is ‘only an extension to the existing Eshkolot settlement, south of Hebron”.

The two Palestinian lawyers then file an appeal against this claim arguing that the issue at hand is about “establishing a new settlement, and not expanding an existing one”.

The location of the planned new settlement is three aerial kilometers away from the Eshkol settlement, and eight ground kilometers.

This distance legally means that the issue here is not an expansion of an existing settlement, but the establishment of a new one.

The lawyers said that this victory is very important as Israel’s military establishment rarely accepts appeals filed against settlement plans in the occupied territories.

“This is an important step, we must use this precedent in cases regarding other illegal settlements in the West Bank”, the two lawyers said, “Israel’s military establishment, in the vast majority of cases, rejected appeals filed by the Palestinians, or by Israeli groups such as Peace Now, or Bimkom.

(Bimkom; Planners for Planning Rights – an Israeli non-profit organization formed in 1999 by a group of planners and architects, in order to strengthen democracy and human rights in the field of planning).