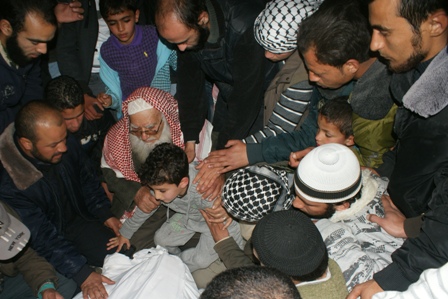 As Israel continues its military offensive against the Gaza Strip since Friday evening, Palestinian medical sources reported that the number of Palestinians killed by Israeli missiles arrived to 15, while more than 30 were wounded.On Saturday evening, the Israeli Air Force carried out two strikes targeting Gaza city, and Rafah, in the southern part of the Gaza Strip.

Medical sources reported that one resident was killed in Rafah, while two others were wounded when the army bombarded a small wagon, near the tunnels area, west of Rafah.

The Salah Ed-Deen Brigades, the armed wing of the Popular Resistance Committees in Gaza reported that the slain resident is one of its members identified as Mahdi Abu Shaweesh.

Furthermore, two residents were injured when the Israeli Air Force fired a missile at an area west of Gaza city.

The Brigades added that a group of fighters survived an assassination attempt in northern Gaza, and that, late on Saturday at night, its fighters fired two Grad missiles into Nitivot, and one Nasser shell into Shuba settlement.

On Saturday afternoon, soldiers, stationed at the border, close to the Ash-Shuhada’ Graveyard, east of Jabalia in the northern part of the Gaza Strip, opened fire thousands of residents during the burial ceremony of seven fighters who were killed during the ongoing onslaught, and wounded four residents. Medics moved the wounded to a local hospital. The seven fighters are members of the Al-Quds Brigades, the armed wing of the Islamic Jihad.

The Salah Ed-Deen Brigades said that its fighters fired, on Saturday, 29 shells; 9 Grad missiles, 10 mortars, and 10 Nasser homemade shells. Haaretz said that the Iron Dome system managed to intercept 27 out of the 29 shells.

On Saturday evening, Israel decided to close, for one day, all schools in Be’er Shiva (Be’er As-Sabe’), Ofakim, Gan Yivneh, Keryat Malachi, Tovia, Sderot, and the regional councils of Eshkol and Asqalan coast.

The latest round of escalation started after the Israeli army assassinated, on Friday, the head of the Popular Resistance Committees, and his assistance. The army carried out approximately 20 air strikes killing fifteen Palestinians and injuring more than 30.