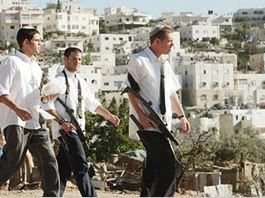 A number of armed extremist Israeli settlers attacked, on Saturday, the outskirts of the towns of Yatta and Bani Neim, near the southern West Bank city of Hebron, while the residents were ordered by the army to stay home.Local sources reported that the settlers, accompanied by Israeli soldiers, installed tents near a military post in the area, and held a barbeque party while paying loud music and dancing.

Resident Ibrahim Al-Jabareen told the Palestinian Information Center that a number of soldiers knocked on his door, and the doors of several nearby homes, and informed the residents that they are not allowed to leave their homes until 2:30 in the afternoon.

The soldiers said that any resident who leaves his home will be arrested, and prosecuted, under the pretext of harassing the feasting settlers.

He added that the settlers have recently stepped-up their attacks in the area, by attacking homes, cars and farmlands. “They attack us, and our lands, while the soldiers imprison us in our homes”, Al-Jabareen stated.

On Saturday at dawn, the army invaded Al-Reehieh village, south of Hebron, and fired rounds and live ammunition into the air, in addition to gas bombs and concussion grenades; no injuries or arrests were reported.

Soldiers were also deployed in Palestinian orchards in the area, and prevented the residents from entering their own lands.

On Friday, a group of extremist settlers of the Tal Romeida and Bet Hadassah illegal outposts in Hebron, attacked three international peace activists and stole some of their equipment while touring in Ash-Shuhada’ Street to monitor the ongoing violations carried out by the soldiers and the settlers in the city.

In related news, soldiers based at a roadblock between the northern West Bank cities of Jenin and Nablus, stopped on Saturday afternoon dozens of Palestinian vehicles and searched them while randomly interrogating several residents, and checking their ID cards.