7 Palestinians, Including a Child, Killed and 24 Others Wounded 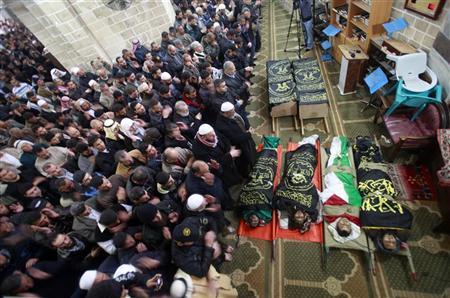 Israeli Occupation Forces (IOF) have continued the military offensive on the Gaza Strip, which they have initiated since Friday evening, 09 March 2012. This morning, two Palestinian civilians, including a child, were killed by an Israeli air strike. Thus, the number of Palestinians killed since the beginning of this offensive has risen to 18 and the number of those wounded has risen to 53. Subsequent to investigations conducted by the Palestinian Center for Human Rights (PCHR) into crimes committed by IOF from Friday evening, 09 March 2012 until Saturday noon, 10 March 2012, investigations conducted by PCHR into the latest incidents indicate:

At approximately 12:45 on Saturday, 10 March 2012, an Israeli warplane fired two missiles at a motorcycle that was traveling on a branch road in ‘Abassan village, east of Khan Yunis. Two activists of the Nasser Saladin Brigades, the armed wing of the Popular Resistance Committees, who live in Bani Suhaila village, east of Khan Yunis, were traveling on the motorcycle. The missiles hit the motorcycle, killing the two activists who were identified as:

2- Mansour Kamal Abu Nussaira, 21, who died shortly after having been admitted to the European Gaza Hospital in Khan Yunis.

At approximately 14:00 also on Saturday, Israeli soldiers stationed at observation towers at the border between the Gaza Strip and Israel to the east of the northern Gaza Strip town of Jabalya opened fire at a number of Palestinian civilians who got close to the border and threw stones, during the funeral procession of a number of victims of Israeli air strikes. Five civilians were wounded by gunshots, including two ones who were in serious conditions.

At approximately 15:10 on the same day, an Israeli warplane fired a missile at a training site of the ‘Izziddin al-Qassam Brigades, the armed wing of Hamas, to the west of al-Maqqoussi apartment buildings in the north of Gaza City. A number of nearby houses were damaged, and as a result, 6 Palestinian civilians were injured by fragments of glass.

At approximately 15:50 also on Saturday, an Israeli warplane fired two missiles at Mahdi Ahmed Abu Shawish, 26, from Rafah, an activist of the Nasser Saladin Brigades, the armed wing of the Popular Resistance Committees, when he was getting ready to ride his motorcycle in Block J in the south of Rafah refugee camp. Abu Shawish was instantly killed by shrapnel throughout the body. Additionally, 5 civilian bystanders, including a 15-year-old child, were wounded.

At approximately 22:15 on the same day, an Israeli warplane fired a missile at a space area in the east of al-Zaytoun neighborhood in the east of Gaza City. No casualties were reported.

At approximately 01:20 on Sunday, 11 March 20122, an Israeli warplane fired a missile at a number of activists of the Nasser Saladin Brigades, the armed wing of the Popular Resistance Committees, who were near Doula intersection in the east of al-Zaytoun neighborhood in the east of Gaza City. An activist, Ahmed Nafez Saber Deeb, 23, was killed and two others were wounded.

At approximately 07:10 also on Sunday, an Israeli warplane fired a missile at a number of Palestinian civilians, mostly children who were playing near their houses in ‘Assaliya Street in the northern Gaza Strip town of Jabalya. As a result, Ayoub ‘Aamer Mohammed ‘Assaliya, 13, was killed, and two of his relatives, including a 7-year-old child, were wounded.

At approximately 08:20, an Israeli warplane fired a missile at a number of Palestinian resistance activists to the east of the Car Market in al-Zaytoun neighborhood in the southeast of Gaza City. Two activists were moderately wounded.

At approximately 11:45, a missile fired by an Israeli warplane landed near an agricultural plot belonging to the al-Wehaidi family in al-Fakhoura area in al-Nafaq Street in the northeast of Gaza City. As a result, the guard of the plot, ‘Aadel Saleh Fares al-Essi, 63, from al-Tuffah neighborhood in Gaza City, was killed by shrapnel throughout the body. Additionally, two resistance activists were seriously wounded.

PCHR reiterates condemnation of these crimes and expresses utmost concern over such escalation, and:

1- Stresses that these crimes are part of the escalation of crimes committed by IOF in the occupied Palestinian territory, especially in the Gaza Strip, in which IOF have used excessive and disproportional force in disregard for the lives of Palestinian civilians.