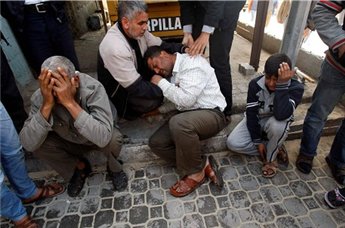 Member of the Executive Committee of the Palestinian Liberation Organization (PLO), Dr. Hanan Ashrawi, stated Saturday that Israel is committing crimes and extrajudicial assassinations against the Palestinian people in the Gaza Strip, and that Israeli Prime Minister, Benjamin Netanyahu, is seeking further provocation in order to destabilize the region, and to provoke the Palestinians into further retaliation.Dr. Ashrawi said that the Israeli offensive against the Palestinians in Gaza, and the dozens of casualties, including children, violate International Law, and all international legitimacy resolutions.

She added that “what is happening in Gaza is another Israeli attempt to meddle into internal Palestinian affairs in order to stop the Palestinian reconciliation”, and that “Netanyahu is seeking to boost his popularity in the upcoming Israeli elections”.

“He is avoiding the implementation of his legal and political responsibilities on the expense of Palestinian blood”, Dr. Ashrawi said, “Israel’s failure in dragging Iran into a military confrontation pushed it to create this cycle of violence against the Palestinians”.

Dr. Ashrawi also voiced an appeal to the international community, the United Nations, and the Quartet Committee, to intervene and stop the Israeli military escalation, and to provide the Palestinian people with the needed protection.

The Palestinian official further called for lifting the illegal Israeli siege on Gaza, and for ending the Israeli occupation.

On the ground, Israel continued it offensive against the Gaza Strip killing 18 Palestinians and wounding dozens of residents. The casualties include children, women and elderly.

Meanwhile, Netanyahu and his Army Chief of Staff said that the strikes against Gaza are expected to escalate as Palestinian resistance groups continue to retaliate to the ongoing assault, the Arabs48 news website reported.

Egypt is currently trying to mediate between Israel and the ruling Hamas movement in Gaza in an attempt to restore calm.

Hamas political leader, Mahmoud Az-Zahhar, headed to Cairo via the Rafah Border Terminal in order to hold talks with Egypt regarding the current situation and the efforts to restore calm.

Earlier on Sunday, a child identified as Ayyoub Asaliyya, 13, was killed and a several other residents were injured when the army bombarded Jabalia, in the northern part of the Gaza Strip.

Meanwhile, the Al-Quds Brigades of the Islamic Jihad, and several other resistance factions, said that there can be no mention of a truce while Israel continues its attacks and continues to kill the residents in Gaza.

Its statement came after a senior resident, identified as Adel Saleh Al-Issy, 61, was killed on Sunday at noon after the Israeli army bombarded an agricultural area near An-Nafaq Street, in Gaza city; another civilian was injured when the army bombarded a nearby farmland.