Netanyahu: Army Ready To Expand Its Operations in Gaza 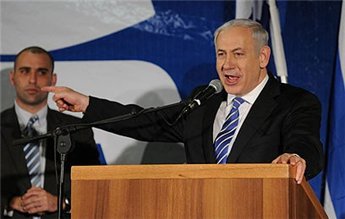 The Israeli Prime Minister, Benjamin Netanyahu, told the right-wing Likud Parliamentary Bloc that the Israeli army is ready to expand its attacks targeting the Gaza Strip.

“Israeli army is ready to expand military operations against the Gaza Strip”, Netanyahu Added, “The military is directing strong blows against the’ terrorists ‘in Gaza, whatever affect our citizens, we will blow it especially since the successful integration between the attack and defence means.

Netanyahu continued to say that “in addition to strength and immunity of citizens in the southern region, enables us to strike ‘terrorism’ in an accurate and painful way, the military also is fully prepared to expand its operations in time of need”.

The latest round of escalation started after the Israeli army assassinated, on Friday, leader of the armed resistance group in Gaza the Popular Resistance Committees, and his assistance.

On Monday Israeli air raids and bombardment of several areas of the Gaza Strip left a school boy, and old man and his daughter along with two fighters dead; brining the death toll since Friday to 23. Medical sources said that the continued Israeli attacks also left 45 injured since Friday mostly children and women.