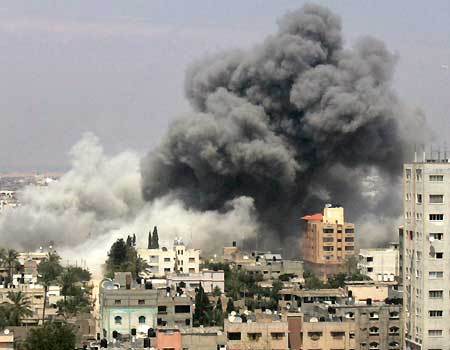 Cairo announced on Tuesday that a ceasefire deal was reached between Israel and Palestinian resistance groups in Gaza ending five days of escalation in the coastal enclave.Egyptian officials announced that the deal took effect on Tuesday morning. The Egyptian government issued a statement saying that “a deal was reached to end the recent operations from both sides, and the start of general calm including the halt of assassinations. The deal came into effect at 1:00 AM on Tuesday, and Egypt will be monitoring its implementation.”

The Islamic Jihad movement was first to welcome the deal and announced that it will honor it as long as Israel does not extra judicially assassinate its fighters and leaders, in addition to leaders and fighters of other resistance groups in Gaza and the West Bank.

The latest round of escalation started after the Israeli army assassinated, on Friday, leader of the armed resistance group in Gaza the Popular Resistance Committees, and his assistance.

In total 23 Palestinians were killed in Israeli aerial bombardment and some 45 civilians were injured; most of the casualties are civilians. The last attack on Monday afternoon left an old man and his 30 year old daughter dead. Earlier on Monday morning a school boy was killed when jet-fighter attacked a playground near a local school in Gaza.