Ayalon: “We Will Not Allow UN Committee Members Into The Country” 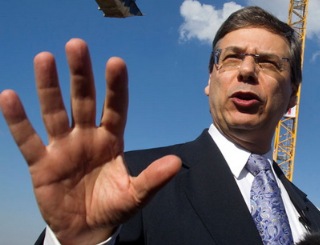 Israeli Deputy Foreign Minister, Danny Ayalon, stated Sunday that Israel will not cooperate with the United Nations Human Rights Council and its investigation committee, and will not allow committee members to enter the country, the Arabs48 News Website reported.Ayalon claimed that this committee is politically motivated, and has no real moral or political values, adding that “there is no need to cooperate with this committee, as its conclusions are predetermined”, according to Ayalon.

On Thursday, the Human Rights Council of the United Nations, passed resolution ordering the first ever investigation into the effects of Israeli settlement activities on the rights of the Palestinian people.

The resolution was passed with 36 votes, while 10 member countries absented, and the United States singled itself out as the only country that voted against it.

Speaking to Israeli Radio on Sunday morning, Ayalon said that Israel will be weighing its options regarding withdrawing from the Human Rights Council which he described as a “tool to attack Israel while the Palestinians are allowed to prepare for Goldstone to report.”.

He further stated that “the Palestinians must understand that Israel is conducting goodwill measures towards them, and will not allow these attempts to harm it to continue”.

Israel is currently weighing the option of, once again, stopping the transfer of tax and customs money it collects on behalf of the Palestinians on border terminals in the West Bank as all borders in the West Bank are fully controlled by Israel.