Settlers Attack A Resident In Hebron 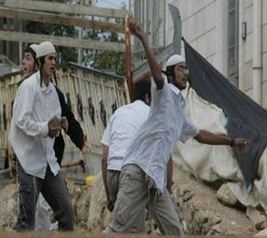 Palestinian medical sources reported, Sunday, that one resident was injured after being attacked by a group of fundamentalist Israeli settlers near Yatta, in the southern Bank city of Hebron. Settlers also uprooted dozens of olive saplings near Bethlehem.The sources added that resident Mohammad al-Adra, 33years old, from at-Tiwana village, was bleeding from his head after the settlers attacked him as he was plowing his land.

The settlers came from the Karmiel illagel settlement outpost, close to at-Tiwana. They tried to stop the resident from plowing his land, and tried to remove him by force.

They proceeded to attack him with batons, and repeatedly punched him until local residents rushed to save him.

Following the attack the settlers ran back to their outpost. Israeli soldiers did not intervene and the Israeli police force did not order an investigation, media sources reported.

Local sources reported that the settlers uprooted 85 saplings that were planting by Abu Ghalyoun in his orchard four years ago. The settlers took the saplings, apparently to plant them in their illegal outpost.