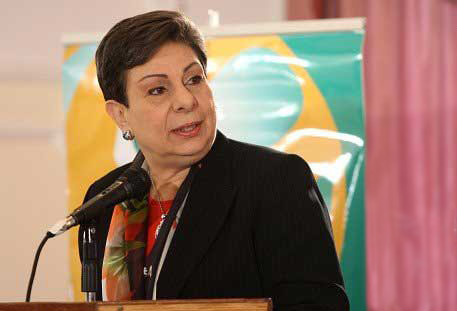 On Monday Dr. Hanan Ashrawi, member of the PLO executive committee, slammed the Israeli government threats to cut tax revenue as part of Israeli response to the last week UN council for Human Rights decision to investigate West Bank settlements.Israeli ministers called on Monday on their government to stop sending tax revenue Israel collects on behalf of Palestinian Authority at border crossings. The calls were in response to the Palestinian President effort at the UN council for human rights last week which resulted in the formation of a committee that will investigate Israeli settlements built in the occupied West Bank.

“ Our people will not submit to Israel’s blackmail that is aimed at stopping Palestinian political work towards holding Israel accountable for its violations of international law and the rights of the Palestinian people” Dr. Ashrawi stated in a press release today.

On Monday the Israeli government decided to cut ties with the UN council for human rights and vowed to not allow the council investigation committee to enter the country.

Commenting on Israel’s PM, Netanyahu and his Forging Affairs Minister, Lieberman, statements, Dr. Ashrawi said that their statements are “immoral” and called on the Israeli government to allow the investigations committee to enter the country and to facilitate its work.

According to international law all Israeli settlements in the West Bank and East Jerusalem, home to half a million settler, is illegal. Palestinians demand a total freeze of construction in settlements before peace talks could resume, a demand the Israeli government refuses.