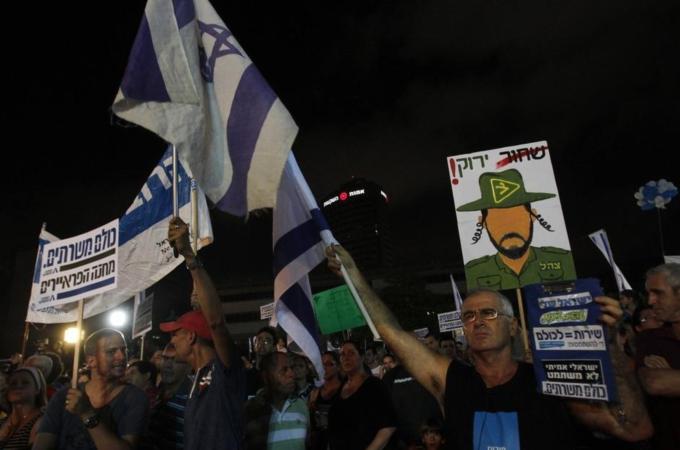 The government of Prime Minister Netanyahu is in the process of revoking the military and national service exemption currently offered to Palestinians and ultra-Orthodox Jews living in Israel.Arab-Israelis and ultra-Orthodox Jews have largely been exempt from military and national service for decades. Now, as the result of a ruling by the Israeli Supreme Court, those service exemptions may soon be revoked.

Al-Jazeera reports that the panel convened to write a new reform of the conscription law has been temporarily disbanded. It is unclear when the panel will re-convene. In the meantime Palestinian and Orthodox communities in Israel are engaging in public condemnations of the reform efforts.

The reforms are potentially disastrous for Israel’s large Palestinian population. Palestinians make up nearly one-fifth of the Israeli’s population but they are the least represented community in the military, government, or national service. Palestinians also receive vastly less government support for community projects, education, home construction, or healthcare.

Conscription reform efforts have called on tripling the number of Palestinians who currently serve in the Israeli military from 2,400 in the next five years. Unfortunately, these proposals say nothing about increasing government support for Palestinian communities.

Forcing Arab Israelis to serve in a military, which many consider to be an illegal occupation force, could cause widespread resistance. This is particularly true if the Arabs who are forced into military service do not see any reciprocal increase state support for their largely forgotten and impoverished communities.

Opposition from the Orthodox community is also quite strong, reports BBC News, but it is also perhaps less justified. Secular Israelis have called on more Orthodox involvement in the military and national service for years. The issue has also been championed by many in Israel’s social progress movement.

Contrary to the Palestinian case, Orthodox Israeli communities receive the most per capita government support in the State of Israel. Ultra-Orthodox communities account for approximately 50% of the illegal West Bank settlements and were among the strongest supporters of constructing the enormously expensive annexation wall, which requires huge numbers of military personnel.