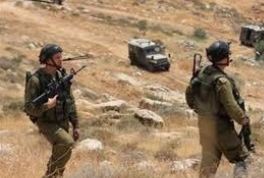 Palestinian medical sources reported that a Palestinian man, in his thirties, was shot and wounded by Israeli military, on Monday afternoon, in al-Qarara town, east of Khan Younis, in the southern part of the Gaza Strip.The sources said that the man was shot in his leg by Israeli soldiers stationed at a military tower, near the eastern border to al-Qarara. He was moved to Nasser Hospital in Khan Younis.

In related news, Palestinian fighters fired one shell at an Israeli tank driving near the eastern border of Khan Younis; no injuries were reported.

Israel prohibits the Palestinians from approaching border areas in the Gaza Strip, and its soldiers open fire at any person who enters areas marked as no-man zones.

Dozens of casualties were reported among farmers working in their own lands, and among workers who collect scrap metal and debris of bombarded and demolished buildings for recycling.

Israel claims its measures aim at preventing Palestinian fighters from approaching the border area to infiltrate into nearby military bases, and to prevent them from firing homemade shells.