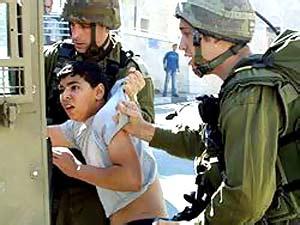 In a report published this month, a delegation of British lawyers and MPs who visited Israel/Palestine in 2011 concluded that Israel violates six articles of the United Nations Convention on the Rights of the Child. In a 36 page report titled ‘Children in Military Custody,’ the delegation stated that the following articles were broken:

It was further noted that:

‘It may be that much of the reluctance to treat Palestinian children in conformity with international standards stems from a belief, which was advanced to us by a military prosecutor, that every Palestinian child is a potential terrorist. Such a stance seems to us to be the starting point of a spiral of injustice and one which only Israel, as the Occupying Power in the West Bank, can reverse.’

The delegation was headed by Right Hon. Sir Stephen Sedley and lists the names of representatives of both the Palestinian and the Israeli occupying forces. Of the two Israelis the delegation spoke to, Lt. Col. Robert Newfeld, chief military prosecutor, and his deputy, Maj. Ronen Shor., it is not indicated which one denounced that every Palestinian child as a future terrorist, but the fact that one of them did, is a worrying indicator and one that may only reinforce the international community’s perception of how Israel views Palestinians living in the occupied territories. It is perhaps more worrying that such a prominent Israeli official was willing to openly admit these sentiments to a high-level foreign delegation

One of the 40 recommendations in the report aims to address what is seen by many as a system of discrimination against Palestinians. It calls for the Israeli law which prohibits the detention of children younger than 14, be applied universally to cover Palestinian children, and not only Israeli children.