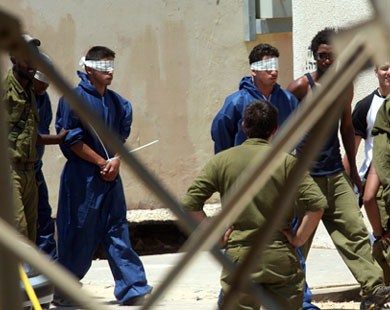 The Red Cross announced, during a Thursday meeting with representatives of national and Islamic factions, and a committee of parents of political prisoners held by Israel, that Gaza Strip detainees, held by Israel, will be allowed family visits starting Monday under certain restrictions and conditions set by Israel. The Red Cross said that representatives of the Husam Society for Detainees, Muhjat Alquds Foundation, and Ansar Al-Asra Foundation, also participated in the meeting.

They were informed that 25 Gaza Strip detainees, held at the Ramon Israeli Prison, will be allowed visits on the first stage; a total 47 family members of the 25 detainees will be allowed family visits under preconditions set by Israel.

The preconditions are; only wives, fathers and mothers will be allowed to visit, families will not be allowed to bring food or clothing for their detained family members; families are only allowed to carry drinking water.

Furthermore, spokesperson of the Israeli Prison Administration told the France Press Thursday that family visits for Gaza Strip detainees will be resumed Monday.

Family visits were one of the main demands of the detainees who held an open ended hunger strike in Israeli prisons and detention camps. Israel eventually agreed to reinstate visits to Gaza Strip detainees after it stopped them when it imposed that siege on Gaza following the abduction of Corporal Gilad Shalit in June 2006. Shalit was released on 18 October 2011 as part of a prisoner swap deal in exchange for the release of a 1027 Palestinian detainees.

In related news, AMNESTY International called on Israel to provide the needed medical attention to detainees Samer Al-Barq and Hasan Safady who have been on hunger strike since May and June, and demanded Israel either to release them or file charges against them.

Sarsak was abducted by the army on July 22, 2009, at the Erez terminal while he was heading to the Balata Sports Center in Nablus, in the northern part of the West Bank; Sarsak is a professional soccer player. But, despite the fact that Israel granted him a permit to cross into the West Bank, soldiers stationed at the terminal abducted him and took him to the Asqalan interrogation center where he was brutally tortured for 30 days.

On August 23, 2009, Israel issued an arrest warrant against Sarsak, accusing him of being an “illegal combatant”, one of the forms of Administrative Detention used by Israel to confine hundreds of detainees for extended periods of time without charges or trial.

On March 19, 2012, Sarsak started his open-ended hunger strike protesting his illegal imprisonment, and the Israeli Prison Administration moved him from the Negev Detention Camp to solitary confinement in Eshil.

On April 16 2012, Sarsak was moved to the Ramla Prison clinic due to a sharp deterioration in his health condition but he continued his hunger strike and refused to take medication.