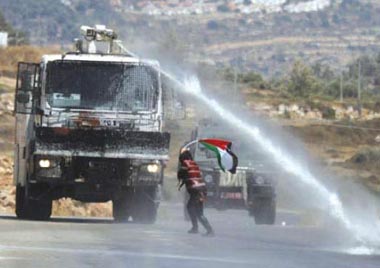 In just one example of this week’s 63 invasions, on Wednesday July 11th at approximately 01:30, Israeli forces moved into Beit Ummar town, north of Hebron. They raided and searched a number of houses and abducted Jalal Qassem al-Ra‚Äôei, 42. Al-Ra‚Äôei is a worker who sustained a fracture to the right foot two weeks ago. Israeli forces also fired a sound bomb at a nearby house belonging to Nemer ‚ÄėOlayan Ekhlil. As a result fire broke out in trees and olives near the house.

In the Gaza Strip, a Palestinian man was wounded this week by Israeli forces in the northern Gaza Strip when he was together with other workers collecting scraps of construction materials. On Thursday, July 5, At approximately 11:30, Israeli soldiers positioned on observation towers on the border between the Gaza Strip and Israel to the north of Beit Hanoun town opened fire at a number of workers who were collecting steel and plastics in the north of the town to sell them to traders for recycling. As a result, one of the workers, Mohammed Rushdi Kharawat, 21, was wounded by a bullet to the right thigh, when he was nearly 200 meters away from the border.

During the reporting period, Israeli warplanes launched 3 air strikes at a training site of the Palestinian resistance, an open area and agricultural lands in the Gaza Strip.

Also in the Gaza Strip, Israeli forces conducted one limited incursion into Palestinian areas to the east of Khan Yunis, during which they leveled areas of Palestinian land.

On 05 July 2012, a number of Israeli settlers from ‚ÄúTaffouh‚ÄĚ settlement, south of Nablus, cut and destroyed at least 120 olive trees in Yatma village.

On the same day, Israeli settlers seized a 5-dunum area of Palestinian agricultural land in al-Khader village, south of Bethlehem. They also placed a mobile home on the land.

On 09 July 2012, Israeli settlers who gathered in Nabi Younis area at the northern entrance of Halhoul town, north of Hebron, attacked Palestinian civilian vehicles traveling in the area, and destroyed windows of some vehicles.

On the same day, dozens of Israeli settlers stormed the site of an ancient synagogue, which is located in an area under the control of the Palestinian Authority according to the Oslo Accords, to conduct religious rituals. Soon, Israeli forces moved into the area in an attempt to control and evacuate the settlers.

During the reporting period, Israeli forces used force to disperse peaceful demonstrations organized in protest to the construction of the annexation wall and settlement activities in the West Bank. As a result, 4 Palestinian civilians, including a child, were wounded and dozens of demonstrators suffered from tear gas inhalation. Israeli forces also abducted two Palestinian civilians and 3 international human rights defenders.

Following the Friday Prayer on 06 July 2012, dozens of Palestinian civilians and international and Israeli human rights defenders organized a peaceful demonstration in Bil’ein village, west of Ramallah, in protest to the construction of the annexation wall and settlement activities. They raised the Palestinian flag and called for ending political division. They then moved towards areas of annexation wall. They called through megaphones on Israeli settlers in ‚ÄúMitityahu‚ÄĚ settlement to leave Palestinian land. Israeli soldiers stationed in the area fired rubber-coated metal bullets, sound bombs and tear gas canisters at the demonstrators. As a result, a Palestinian civilian was wounded by a rubber-coated metal bullet to the right foot. Additionally, a number of demonstrators suffered from tear gas inhalation.

Also following the Friday Prayer on 06 July 2012, dozens of Palestinian civilians and international and Israeli human rights defenders organized a peaceful demonstration in Ne‚Äôlin village, west of Ramallah, in protest to the construction of the annexation wall and settlement activities. The demonstrators moved towards areas of the annexation wall. Immediately, Israeli soldiers stationed in the area fired rubber-coated metal bullets, sound bombs and tear gas canisters at the demonstrators. As a result, some demonstrators suffered from tear gas inhalation.

Also following the Friday Prayer on 06 July 2012, dozens of Palestinian civilians and Israeli and international human rights defenders gathered in the center of Nabi Saleh village, northwest of Ramallah, to start the weekly peaceful protest against the construction of the annexation wall and settlement activities. The protesters walked towards the gate erected by Israeli forces near the entrance of the village and leading to Palestinian lands that Israeli settlers from the nearby ‘Halmish’ settlement are trying to seize. Israeli soldiers who had been extensively deployed in the area and near all the entrances of the village since the morning, began to confront the protesters who wanted to walk towards the affected lands. Israeli soldiers fired live and rubber-coated bullets, sound bombs and tear gas canisters at the protesters. As a result, some demonstrators also suffered from tear gas inhalation. Israeli forces also abducted 4 demonstrators, including 3 international human rights defenders. Two of the detainees were identified as: ‚ÄėAtallah Tamim Tamimi, 63, who was released two hours later; and Rana Nazzal, 19, a Canadian Palestinian citizen.

At approximately 13:15 also on Friday, 06 July 2012, Palestinian civilians and international human rights defenders organized a peaceful demonstration in Kufor Qaddoum village, northeast of Qalqilya, in protest to the continued closure of the eastern entrance of the village by Israeli forces. They moved towards the entrance. Immediately, Israeli soldiers fired tear gas canisters and sound bombs at them. As a result, 3 demonstrators, including a child, were hit by tear gas canisters. Some demonstrators also suffered from tear gas inhalation. Additionally, fire broke out in some agricultural area due to the use of tear gas canisters and sound bombs by Israeli forces, burning at least 20 olive trees belonging to Mahmoud ‚ÄėEissa ‚ÄėObaid. Israeli forces also abducted Majed ‚ÄėAbdul Mo‚Äômen Jom‚Äôa, 40.

Due to the number and severity of Israeli human rights violations this week, the PCHR made several recommendations to the international community. Among these were a recommendation that the High Contracting Parties to the Fourth Geneva Convention to comply with their legal obligations detailed in Article 146 of the Convention to search for and prosecute those responsible for grave breaches, namely war crimes.

Also, the PCHR calls for the immediate implementation of the Advisory Opinion issued by the International Court of Justice, which considers the construction of the Annexation Wall inside the West Bank illegal.