PLC Head To Be Released Thursday 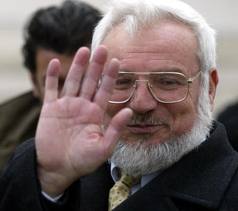 Representing the imprisoned and democratically-elected head of the Palestinian Legislative (PLC), Dr. Aziz Dweik, lawyer Fadi Al-Qawasmi stated that Dweik will be released from an Israeli detention camp this coming Thursday.Dweik will be released, ending six months of Administrative Detention without charges, after an Israeli military court accepted an appeal filed by his attorney demanding his immediate release due to the fact that he never faced any charges.

Israel kidnapped Dr. Dweik on January 19 2012, as he was trying to cross the Jaba’ roadblock, north of occupied Jerusalem. He was heading back home in Hebron when he was stopped at the Jaba’ roadblock while leaving the central West Bank city of Ramallah.

Dr. Dweik was kidnapped an imprisoned by Israel at least six times, including when he was kidnapped on June 29 2006, and spent three years in Administrative Detention until he was released on June 23 2009.

In 2002, he was forced into exile to Marj Az-Zohour in Lebanon, along with fifteen Hamas officials; they camped out there refusing to head to Lebanon until Israel was obliged to allow them back into the country.

There are currently 22 elected legislators from the occupied West Bank and occupied Jerusalem who are still imprisoned by Israel. 15 of them are of the Change and Reform Bloc of Hamas, including Dr. Dweik.

Fateh leader, legislator Marwan Barghouthi, and secretary-general of the Popular Front for the Liberation of Palestine (PFLP), Ahmad Saadat, are also imprisoned by Israel and serving life terms. There are approximately 26 legislators currently detained by Israel.