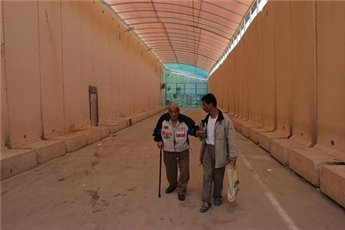 A Palestinian man who was attempting to travel from Gaza to Jerusalem for medical treatment was detained due to travel restrictions in the third such case this month according to Ma’an news.

Jabaliya resident, Rawhi Fouad Kerkz, 43, went to meet Israeli intelligence officials on Sunday at Erez crossing to discuss his permit to travel to the hospital in Jerusalem. According to Al-Mezan Center for Human Rights and Physicians for Human Rights-Israel, Kerkz never returned.

Israeli intelligence summoned Kerkez to Erez to review his application despite the fact that his appointment at Al Makassed Hospital in Jerusalem had already passed. He left early on Sunday and later in the evening his family received a call from an Israeli official saying he was being held in Ashkelon jail.

The two human rights groups said that Kerkez’s detention is the third case this month of Palestinians being detained while trying to leave Gaza for medical treatment. They urged the international community to pressure the Israeli government to support the Palestinians’ right to medical treatment.

The Israeli Ministry of Defense could not be reached for comment on Kerkez’s detention.