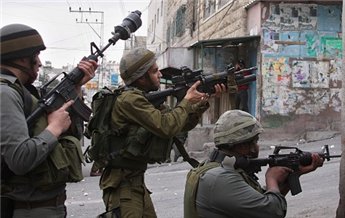 Israeli forces raided several neighborhoods in the areas in and around Hebron on Wednesday, detaining nine Palestinians in the process, while Israeli settlers simultaneously attacked Palestinians according to reports from WAFA and PNN.In Hebron, Tamer Jabarin, 22, and Mo’tasem al-Natsheh had their homes ransacked and were arrested by the Israeli military while Israeli settlers attacked several others.

In the Tal al-Rumeida neighborhood of Hebron, six Palestinians were detained by Israeli soldiers after the army fired sound and light bombs. Their identities were not revealed.

Soldiers also fired grenades at other houses and buildings were broken into and searched at dawn.

In Beit Ummar, the Coordinator of the Popular Committee Against Settlements and the Apartheid Wall, Mohammad Awad reported that the Israeli military raided the town and arrested a teenager.

Israel has detained 77 Palestinian civilians in military prisons from Beit Ummar to date, and more than 45 of them are children under 18 years old according to Awad. This is a violation of international law and the Fourth Geneva Convention which forbids placing civilians of any age in military prison as well as the detention of children along with adults.