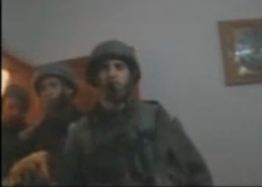 Israeli soldiers invaded, on Saturday evening, the village of Nabi Saleh, near the West Bank city of Bethlehem, and fired several concussion grenades and gas bombs at random before kidnapping one youth.The Media Office of the Popular Resistance Movement in the village reported that clashes were reported on Saturday evening due to escalating attacks and invasions carried out by extremist Israeli settlers against the residents of the village, their property and their lands.

The Office added that the army fired dozens of concussion grenades and gas bombs at the local protesters and at a number of homes; dozens of residents were treated for the effects of teargas inhalation.

It also stated that soldiers broke into and searched dozens of homes before kidnapping resident Majd Taha At-Tamimi, 16, and took him to an unknown destination.

Nabi Saleh village is one of several Palestinian villages that are actively involved in nonviolent resistance against the illegal Israeli Annexation Wall and Israeli illegal settlements in the occupied West Bank.

Israeli and International peace activists participate in these protests, and are frequently attacked and harassed by Israeli soldiers and settlers.