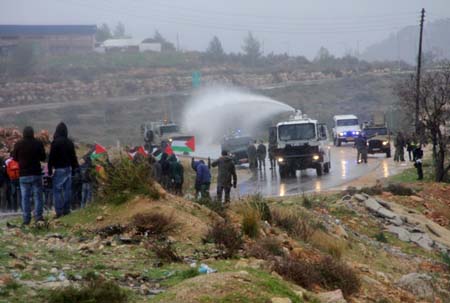 Three Palestinian civilian were injured, one critically, on Saturday evening, by Israeli troops gunfire in the village of Al Nabi Saleh near the central West Bank city of Ramallah.Villagers organized a protest in solidarity with Gaza and against the Israeli continued attacks on the coastal region which is so far claimed the lived of 42 Palestinians and left 400 others injured.

People marched from the village and reached the road leading to the nearby illegal Israeli settlement of Halmish. Israeli soldiers stationed there fired tear gas and rubber coated steel bullets and forced people back into the village.

Witnesses told IMEMC that soldiers were firing live ammunition at residents randomly. Local youth clashed with the invading forces and managed to force them out of the village.

on Friday three Palestinian civilians were injured; many were treated for the effects of tear gas inhalation when troops attacked the weekly protest in the village of Al Nabi Saleh.