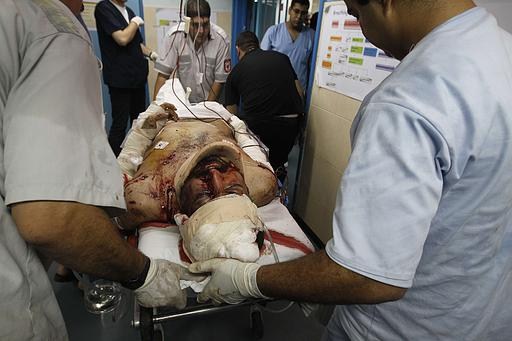 Palestinian medical sources in the Gaza Strip reported that a young Palestinian man died of wounds suffered on Saturday at dawn after the army opened fire at him in Rafah, and that another Palestinian died of injuries suffered during the recent war on Gaza.Adham Abu Salmiyya, spokesperson of the Emergency and Medical services in Gaza, reported that Mahmoud Ali Jarghoun, from Rafah, died of serious injuries he suffered Saturday after the army opened fire at residents near the Sofa area, east of Rafah.

Abu Salmiyya added that the army used a type of bullets that make a small entry hole but cause extensive damage to bone and tissue, and usually exits the body causing further and larger damage.

He added that many Palestinians have been shot by these rounds, and that those who survived the shots, especially in the legs, require extensive rehabilitation and therapy, and usually do not fully recover.

Furthermore, one Palestinian identified as Ramadan Mustafa Abu Hasanen, 24, from the Al-Boreij refugee camp in central Gaza, died of wounds suffered during the recent war on Gaza. His death brings the number of Palestinians killed due to the latest Israeli aggression on Gaza to 178.

On Friday, eleven Palestinians were shot and wounded by Israeli military fire; five of them were shot in northern Gaza, four east of central Gaza, and two in southern Gaza.