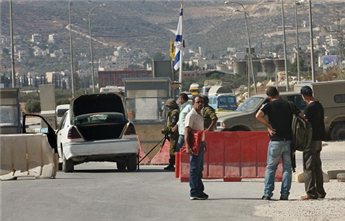 Palestinian medical sources reported that a Palestinian man was shot and killed, Monday morning, by Israeli military fire, just outside of the northern West Bank city of Nablus.Israel claimed that the man’s vehicles collided with an Israeli security jeep, and that he tried to attack Israeli security agents who were in the jeep with axe.

The Maan News Agency reported that the man, identified as Hatem Shadid, 35, from Allar village near Nablus, was driving a car that collided with the Israeli military vehicle driving near Beit Lid village in the area, adding that the Israeli security vehicle overturned, and two Israeli security agents of the Shin Bet were injured.

The Israeli army claimed that, after the accident, Shadid approached the wounded officers carrying an object, allegedly an axe, and struck one agent in the head and the other in the shoulder, before one of the officers shot him dead.

In related news, Israeli soldiers shot and injured a 16-year-old Palestinian from the Al-Boreij refugee camp in central Gaza.

Medical sources in Gaza reported that Jihad Sawarka suffered minor injuries and was moved to the Al-Aqsa Martyrs Hospital.

Also on Saturday, a 21-year-old Palestinian man died of wounds suffered by Israeli military fire on Friday evening. Another Palestinian, identified as Mustafa Abu Hassanen, died of injuries suffered during the eight-day Israeli war on Gaza.

On Friday Eleven Palestinians were shot and wounded by Israeli military fire; five of them were shot in northern Gaza, four east of central Gaza, and two in southern Gaza.

At least 40 Palestinians have been shot and wounded by Israeli military fire since Egypt brokered the cease fire deal that ended the recent Israeli war on Gaza, and more than 30 Palestinian fishermen have been kidnapped.