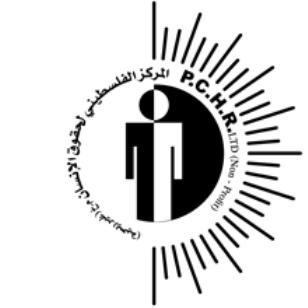 In violation of international law, Israel is continuing its policy of settlement expansion in the West Bank in general, and occupied East Jerusalem in particular. The Office of the Israeli Prime Minister Benjamin Netanyahu has approved the construction of 3,600 additional settlement units in East Jerusalem.The Palestinian Centre for Human Rights (PCHR) condemns in the strongest terms this Israeli decision and stresses that, under the Fourth Geneva Convention, Israel is prohibited from deporting or transferring its own civilian population into the occupied Palestinian territory (oPt).

Moreover, under Article 8(2)(b)(viii) of the Rome Statute of the International Criminal Court, “the transfer, directly or indirectly, by the Occupying Power of parts of its own civilian population into the territories it occupies” constitutes a war crime.

While it appreciates the actions taken by several European countries, which summoned ambassadors of Israel in these countries to protest the new settlement projects, PCHR repeats its call for the European Union (EU) and its Member States to demand adherence to Article 2 of the Euro-Israel Association Agreement that sets Israel’s respect for human rights as a precondition for continuous economic cooperation.

PCHR calls upon EU States to strengthen their position against settlement expansions and to suspend trade in Israeli goods and commodities, especially those produced in Israeli settlements in the oPt.

PCHR further calls upon the High Contracting Parties to the 1949 Geneva Convention (IV) Relative to the Protection of Civilian Persons in Time of War to convene in order to take practical steps to ensure Israel’s respect for the Convention in the oPt and to urgently provide protection to Palestinian civilians and their property.

On Monday evening, 03 December 2012, it was reported that the new construction plan would be implemented in “Ramat Shalom” and “Givat Hamatos” settlement neighborhoods.

On Friday, 30 November 2011, in the hours following the UN General Assembly’s adoption of a resolution accepting Palestine as a non-member observer state in the United Nations, the Israeli government issued a plan to construct 3,000 settlement units in East Jerusalem and the settlements of “Ma’ale Adomim,” east of Jerusalem; “Ariel” in the north of the West Bank; and “Efrat,” south of Bethlehem.

The Israeli government also decided to accelerate structural plans to begin construction in the “E1” area, which is aimed at linking the “Ma’ale Adomim” settlement with Jerusalem.

The proposed construction of around 3,600 settlement units in this area would render establishing geographical contiguity between the north and south of the West Bank impossible, and diminish any chance to establish a viable Palestinian state.

PCHR strongly condemns these measures and all settlement activities in the oPt, especially in East Jerusalem, and:

1. Calls upon the international community to intervene to compel Israel to stop all settlement activities in the oPt, especially in East Jerusalem;

2. Confirms that East Jerusalem, which has been occupied since 05 June 1967, is an integral part of the oPt, and that actions taken by Israel following the occupation of the city do not change its legal status;

3. Reminds that, under Article 49 of the 1949 Geneva Convention (IV) Relative to the Protection of Civilian Persons in Time of War, all Israeli settlement activities in East Jerusalem constitute a violation of international humanitarian law;

4. Further reminds that, under Article 8(2)(b)(viii) of the Rome Statute of the International Criminal Court, all Israeli settlement activities in East Jerusalem constitute a war crime;

5. Calls for the application of the Advisory Opinion issued by the International Court of Justice on 08 July 2004, which considers the annexation wall being built by Israel in the West Bank, including East Jerusalem, illegal and calls for the dismantlement of such parts of it that have been built;