Army Demolishes A Mosque Near Hebron 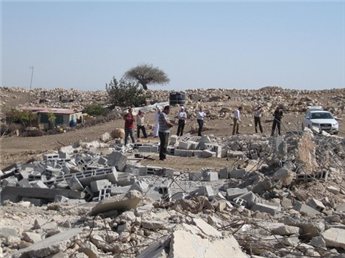 For the second time, Israeli soldiers demolished the Al-Mafqara mosque, east of Yatta town, south of the southern West Bank city of Hebron, and did not even allow the residents to empty the mosque or remove the copies of the Holy Quran.The Maan News Agency reported that this is the second time that Israel demolishes this mosque under the pretext of being built without a construction permit, despite the fact that it is in an area that is under Palestinian civil control.

Local sources reported that the soldiers did not allow the residents to empty the mosque, or remove copies of the Holy Quran, or anything that was in the holy place.

The 40 square-meter mosque was built in 2003, and Israel decided to demolish it but, in 2005, the villagers managed to obtain an order from an Israeli court preventing the army from demolishing it.

The villagers denounced the Israeli attack against their mosque, and considered it a direct violation to the internationally-guaranteed Freedom of Worship, and as an act that is meant to force the residents out of their lands, especially since Israel wants to expand the illegal settlements of Etnael and Evigal on the expense of the villagers lands.