Dozens Injured, One Seriously, in Ongoing Clashes In Hebron 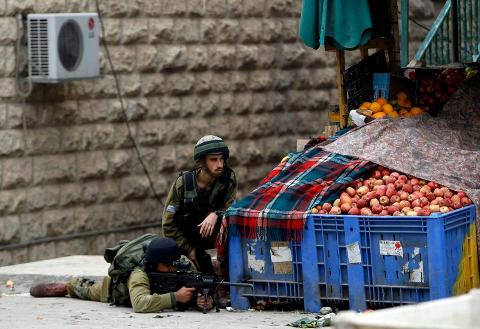 Palestinian medical sources in Hebron, in the southern part of the West Bank, reported that one youth was seriously injured by Israeli military fire during ongoing clashes that erupted after the army shot and killed, Wednesday, Ziad Awad Salaymah, 17.The Red Crescent in Hebron reported that a 15-year-old child identified as Nasser Wasfi Ash-Sharabaty, was shot by a live round in the chest, and described his injury as serious.

He was shot by the army during clashes that took place in Bab Az-Zawiya area in Hebron following the funeral of Salaymah.

The Youth Coalition Against Settlements In Hebron voiced an urgent appeal for blood donations type O- for Ash-Sharabaty who is under surgery in Al-Mezan Hospital in Hebron.

Dozens of Palestinians have been shot and injured by Israeli military fire, Thursday, and were moved to local hospitals and medical centers, some of them were shot with live rounds while others were hit by rubber-coated metal bullets, and the rest were treated for the effects of tear gas inhalation.

Thousands of Palestinians participated in the funeral of Salaymah; head of the Palestinian Legislative Council (PLC), Dr. Aziz Dweik, and several parliamentarians, officials, public and social figures were also present.