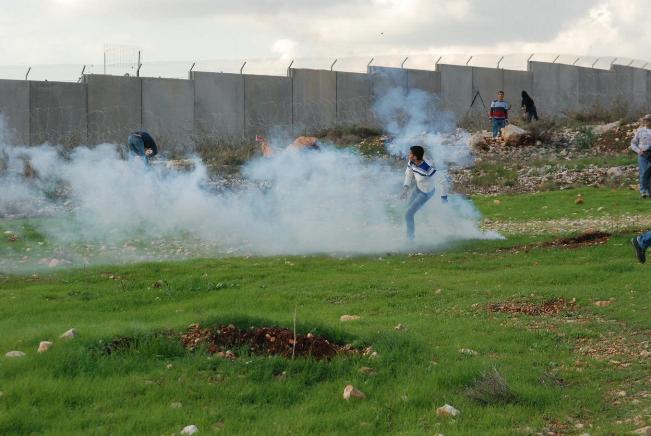 Israeli soldiers attacked, Friday, the weekly nonviolent protests against the illegal Israeli Annexation Wall and Israel’s illegal settlements in different parts of the occupied West Bank; dozens of injuries were reported.The army sprayed the protesters with chemicals in addition to firing dozens of gas bombs, and rubber-coated metal bullet, and several rounds of live ammunition.

In Bil’in, near the central West Bank city of Ramallah, two nonviolent protesters were injured by rubber-coated metal bullets while dozens suffered the effects of teargas inhalation.

This Friday, the protest was titled “The Friday on Anger”; local, Israeli and International peace activists marched towards the Abu Lemon area, that was returned to the residents of Bil’in after a lengthy legal battle, and the soldiers showered them with wastewater mixed with chemicals and fired gas bombs, concussion grenades and rubber-coated metal bullets.

The protesters marched carrying Palestinian flags, and chanted slogans calling for national unity and for remaining steadfast on all national standards until liberation and independence, and called for the release of all political prisoners held by Israel, especially those held without charges under the illegitimate Administrative Detention orders that violate basic human rights.

The protesters stressed on rejecting Israel’s illegal policies of the deliberate killing of the Palestinians by allowing the army to fire rounds of live ammunition against unarmed nonviolent protesters, and against the Palestinian civilians in general.

The Popular Committee Against the Wall and Settlements in Bil’in strongly denounced the killing of Mohammad Salaymah, 17, who was shot and killed on his birthday, Thursday, by an Israeli soldier who shot him with a live rounds as he was on his way to buy a cake.

The Committee said that this crime is part of ongoing Israeli crimes and violations against the Palestinian people, and that such crimes are acts of “state-sponsored terrorism” that is meant to force the Palestinians to submit to the occupation, its illegal Wall and settlements, and also called for “increasing the nonviolent popular protests in different parts of occupied Palestine to expose Israel’s racist policies”, PNN added.

In Kufur Qaddoum village, near the northern West Bank city of Qalqilia, the residents and their Israeli and international supporters also marched against the Wall and settlements, and reiterated their demand that the army must open the main road of the village that was blocked and sealed by the military several years ago sharply restricting the residents freedom of movement.

Israeli peace activists also expressed their rejection to Israeli statements that that tried to portray the protesters as violent, after pictures of Israeli soldiers, attacking the protesters last week, fleeing the area running away from unarmed protesters, were published.

Dozens were also treated for the effects of teargas inhalation after the army attacked the nonviolent protest in Nabi Saleh village, near Ramallah.

The protesters marched against the Wall and settlements, and in condemnation of the killing of Mohammad Salaymah, and dubbed this week’s protest as “the Friday of loyalty with Salaymah, the son of Hebron”.

They marched in the streets of the village chanting slogans against the occupation and settlements, and expressing determination to continue resisting the illegal Israeli occupation.

The army showered the protesters with gas bombs, rubber-coated metal bullets and wastewater mixed with chemicals. The attack led to clashes between the soldiers and the residents and dozens of injuries were reported.

The army also used rounds of live ammunition targeting the protesters and fired several gas bombs at Palestinian homes in the village.

The Popular Committee in Nabi Saleh denounced the ongoing Israeli crimes, including the murder of Salaymah, and condemned the seriously and dangerously escalating attacks carried out by Israeli settlers against the residents, their homes, lands and their holy sites.

Media Coordinator of the Nonviolent Protests in Kufur Qaddoum, Murad Shteiwy, stated that the soldiers installed a roadblock, earlier on Friday, and tried to prevent journalists from reaching the village under the pretext that it is a “closed military zone”, an issue that forced the journalists to take a rough bypass road.
Shteiwy said that preventing the reporters from reaching the village increased fears among the residents that the army intends to implement its threats by using live rounds against the nonviolent protests and against the residents in general.

In Bethlehem, the army used excessive force against nonviolent protesters in Aida refugee camp, leading to clashes near the eastern entrance of the camp, close to the Bilal Bin Rabah mosque. The soldiers fired gas bombs leading to several injuries.

In Al-Ma’sara village, also in the Bethlehem district, the army prevented the protesters from reaching the Wall’s construction site, and violently attacked them.

Coordinator of the National Committee Against the Wall and Settlements in the Bethlehem district, Hasan Breijiyya, reported that the protest also marked the anniversary of the first Intifada, and came in solidarity with hunger striking detainees held by Israel, and facing ongoing violations and aggression.

Breijiyya called for wider protests in solidarity with the detainees, and added that the detainees’ case requires more international actions, not only conferences in Baghdad or elsewhere, as it needs to be highlighted on the international level to raise awareness to this ongoing plight, and demanded the International Community to perform its duties in protecting the detainees and the Palestinian people facing all sorts of violations and abuse by the occupation.