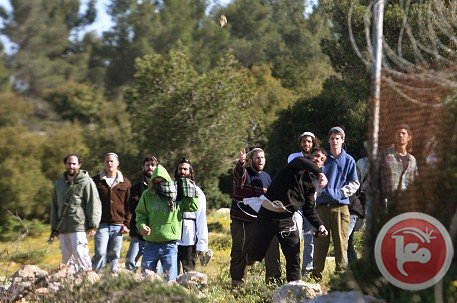 Palestinian medical sources reported Saturday that several injuries took place in Nablus, in the northern part of the West Bank, after extremist Israeli settlers, and soldiers attacked Palestinian homes and vehicles; the army also fired dozens of gas bombs at civilian homes leading to dozens of injuries.The sources said that a young Palestinian woman was injured, Saturday evening, when dozens of extremist settlers attacked a home in Einabous village, south of Nablus, and assaulted its inhabitants.

Extremist settlers also hurled stones at dozens of Palestinian vehicles driving on a road west of Nablus; damage was reported, no injuries.

Ghassan Daghlas, in charge of settlements file at the Palestinian Authority in the northern West Bank, reported that settlers of the Yitzhar illegal settlement invaded the home of Hamdan Ahmad Hussein in Einabous, attacked and injured his wife Lialy Odah, 25, and destroyed furniture and property. Lialy was moved to a local hospital suffering cuts and bruises.

Daghlas further stated that the army did not attempt to remove the settlers, and instead fired dozens of gas bombs at the residents who suffocated and were treated for the effects of tear gas inhalation.

He also said that dozens of settlers continued to gather at the main road, that leads to the village, and continued to throw stones at Palestinian vehicles until evening hours Saturday, causing damage to several vehicles.

Meanwhile in Orif, near Nablus, clashes took place when a number of extremist settlers tried to invade the village, but local residents clashed with them and hurled stones and empty bottles; the army arrived at the scene and fired gas bombs at the residents, but did not force the settlers away.