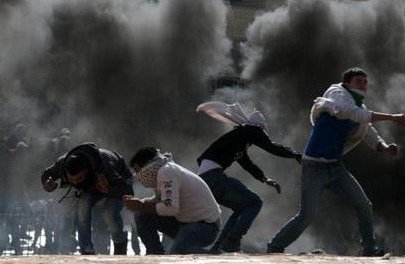 Palestinian medical sources in Jenin, in the northern part of the West Bank, reported Wednesday that several residents have been treated for the effects of tear gas inhalation after the army fired gas bombs at them near the southern entrance of the city. Two children were kidnapped in a nearby village.The sources said that the army installed a sudden roadblock near Jannat Park, stopped dozens of Palestinian vehicles, and detained the residents while interrogating them.

The soldiers also forced the several residents against a wall for an extended period an issue that pushed some residents to hurl stones at the soldiers and their jeeps.

The army then fired gas bombs and rubber-coated metal bullets, and withdrew from the area.

Local sources reported that the army kidnapped Mohammad Zoheir Bani Hasan, 12, and Ayman Abdul-Nasser Bani Hasan, 11, while they were in their family’s farmland, and took them to an unknown destination.

In related news, the army violently attacked, on Tuesday evening, ten Palestinian day laborers from Hebron after stopping them near Nablus city. The attack took place in Asourin village, southeast of Nablus.

The soldiers stopped a vehicle transporting the workers and violently attacked, kicked and struck them with their weapons for more than one hour, eyewitnesses said.

Rateb Jabour, coordinator of the Popular Committee Against Settlements in Yatta, near Hebron, said that the workers, all of the Jabour family, suffered bruises to various parts of their bodies.

In related news, the army kidnapped one Palestinian near Beit El settlement, east of the central West Bank city of Nablus; soldiers claim the Palestinian “intended to stab a Jewish settler”.

The Israeli Police stated that the soldiers noticed a Palestinian walking near the settlement, and after stopping him “due to suspicious behavior” the soldiers found a knife in his possession, and transferred him to an interrogation center.

The Police also claimed that the Palestinian “confessed” during interrogation that he “intended to stab a settler”.