The Right Man in the Right Place 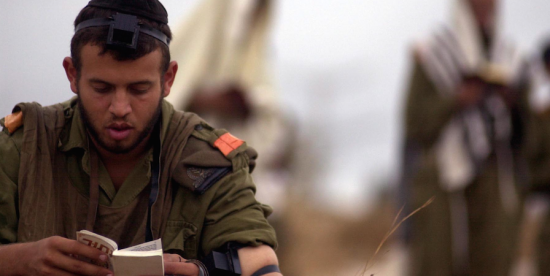 Following Eyal Karim’s appointment as chief rabbi of the Israeli military, secular Israelis must realize that their allies in the fight for a secular democratic state are none other than Palestinians. ~ Eli Aminov

The appointment of Colonel Eyal Karim as chief rabbi of the “world’s most moral army” is the right decision for the right position. Those who advocated for this appointment hope it will improve the occupation army’s armed forces mechanism, prevent situations of cognitive dissonance for young people happily enlisting in top units, and end the ongoing masquerade of internal investigations into war crimes. His appointment will encourage the army of the state of the Jews to be less hesitant and more decisive. Finally, proponents say Karim will get rid of all the hesitancy and deliberations that characterized Jews of the diaspora. As the Beitar hymn goes, through blood and sweat a nation will arise.

As Israel’s army is transformed into an army of God, Karim is not an exception – the opposite is true, actually. He represents an important contribution to the middle ranks of the army’s high command, which is already accustomed to “targeted assassinations” of unwanted Palestinians, the prevention of women from singing in front of religious soldiers, and the gradual removal of female soldiers from units of religious men. The road is already paved for Karim to impose the values of Jewish law onto the military of the state of the Jews.

The military command, which is full of the chief rabbi’s brothers in arms, paved the path for Karim and others like him to enter the military system as educational and moral authorities. Recall Colonel Ofer Winter, who in the last war against Gaza called on his soldiers “to fight for the God of Israel against the people of Gaza who blasphemes against the God of Israel.” He too, like the Chief Rabbi, was promoted to the position of brigadier general after some mumbo-jumbo preaching. An additional brother of Rabbi Karim, Rabbi Yigal Levenstein, is from amongst the founders of the pre-military academy in the settlement of Ali. This week, Levenstein attacked the military. He argued that the army has become confused in leading its education corps, which, according to him, teach religious pluralism and recognition of the LGBT community – a community he defines as “perverts.”

The gospel of Rabbi Karim has long been accepted in the army. It began with the public executions of Palestinians – executions that enjoyed a ‘kosher certification’ from Professor Asa Kasher, one of the authors of the Israeli army’s “code of ethics.” Already, in June 2003, an article was published in the journal of the college of national security by Kasher. He wrote the article with General Amos Yadlin, then the commander of military academies. Under the headline “moral combat against terrorism” the article justifies Israel’s policy of targeted assassinations, euphemized as “tasks of targeted killings”— an indulgence for all past and future military actions.

The theoretical commentary of Karim, a religious authority authorized to rule and issue “fatwas,” does not at all deviate from the rabbinical Jewish legal framework. The secular public likens this legal framework to the “tradition of a father’s home” and remains completely ignorant about it. His sharpest ruling was only brought to the attention of the public by Yedioth Ahronot newspaper in July under the headline “it is permissible to rape during war.” The paper quoted the dishonorable rabbi: “during war it is permissible to fulfill the evil inclination through intercourse with good looking non-Jewish women against their will.” To those shocked by the ruling of the rabbi, go to the shelves of books on Judaism; discover that Jewish law has already dealt with the topic of the rape of non-Jews by Jewish men.

While Rabbi Karim’s ruling was published 13 years before he was appointed as chief military rabbi, apparently he already felt like a warlord of Israel. The first rule according to his gospel is that all wars of Israel are not wars of choice – but wars of religious commandment, which are, as is known, continuous wars. “In wars the boundaries of modesty are violated and even the personality of the individual is erased for the benefit of the group. The feelings and needs of the individual are pushed aside for the success of the nation in war.” How does this fit with the urgent need of the soldier to rape a beautiful, non-Jewish woman? Here is Rabbi Karim’s explanation: “one of the most important and determinant values in war is to preserve the fighting strength of the army.” Consequently, the rape of a non-Jewish woman is permitted in war, “through consideration of the fighters’ difficulties.” Karim adds, “as the success of the whole in war stands before our eyes, the Torah permits the individual to satisfy his evil inclination under the conditions permitted, for the success of the whole.” Interesting to wonder, who turned to the rabbi with such a question?!?

People who ask such a question, and rabbis who provide such responses (instead of directing these people to psychological assistance) are part of the process of primitive religiosity, which is affecting Israeli society overall and the army in particular. This process is caused by a number of factors that are pushing many people, primarily youth, to search for a clearer and hardier sense of identity within the torn and divided society created here by the settlement movement dubbed “secular Zionism.” Taking over historical Palestine did not succeed in building a modern, new nation on the basis of the market and a territorial framework. Consequently, an ongoing crisis of identity emerged. The fundamentally isolationist nature of Zionism, which supports the separation of Jews from the others and negates the possibility of an Israeli nation, resulted in the state of Israel declaring ahead of time that it is the state of an imaginary nation. The “Jewish nation” is a metaphysical concept that is beyond time and space and all of its characteristics are solely religious.

As Judaism is a religion and not a nation as claimed by its ministers, teachers and clerics, the contradiction between a Jewish state and a democratic one is becoming increasingly apparent. Various Israelis choose a side. In the past thirty years the number of Israelis of a Jewish background who define themselves as secular declined from 70 percent to 46 percent. This represents a reduction of a third of the secular population over three decades. During this period, the racism of Jewish law has taken over the military colleges, hesder yeshivas (schools combining religious study with military service) and even the education system, including national (secular) education. This racism connects to the feeling of natural hostility developed by the colonial settler population toward the indigenous nation that formed here before Zionist immigration and in clear feelings of guilt. As a result the apartheid policy, which represents the true legal basis of the state of Israel, worsens.

At this stage there exists no power that can halt the increasing racism of the state of the Jews, the violent animalization of its armed forces and the betrayal of the Israeli intellectuals who continue to stick to a Zionist ideal that never actually existed. Too many of the Jewish Israelis who define themselves as secular believe (with the support of their spiritual teachers who are prevalent in academia, the legal world and literature) the legend that they are non-religious Jews and are enthusiastic supporters of the “Jewish and democratic” oxymoron. Most of them refuse to believe that its twin sister is an “Islamic and democratic” state. Their most serious fear is what they dub a “war of brothers” without understanding that in order to create a real democracy, one must sometimes take the chance of civil war, and who even told them that the racist religious people are their brothers? Why exactly?

If these secular people want life, they must understand that their natural allies are none other than the indigenous people whom Zionism and the state of the Jews have attempted to turn into dust for more than 100 years. Only by forming such a connection through a clear recognition of the Palestinian people’s full rights can the Jewish race be transformed into a secular democratic state – a state in which all of its citizens are equal and where their connection to the state and territory does not rely on religious or community identity. If we do not act to create a democratic political structure possessing a constitution of equality and liberty that will replace the state of the Jews, we will all drown with our children and grandchildren in the swamp of extinction. Rabbi Karim is most suitable to administer the last rites of the society that produced teachers like him and salutes him with ranks and uniforms.

Eli Aminov is a veteran Israeli anti-colonial activist and a member of the Committee for a Secular, Democratic State.