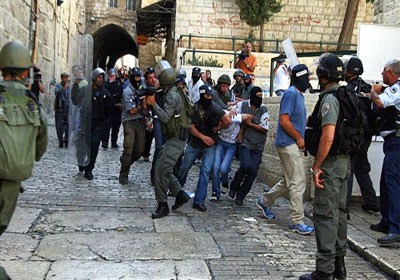 For the second day in a row, Israeli soldiers and policemen continued their campaign in Silwan town, in occupied East Jerusalem. The army broke into homes and stores, and kidnapped a number of residents.Soldiers, policemen, and personnel of the tax department in the city, started their campaign on Thursday morning, and installed several roadblocks at the entrances the neighborhoods of Be’er Ayyoub, Wadi Al-Rababa, Ein Al-Lowza, Al-Bustan, Ath-Thoury, Al-Abbasiyya, Wadi Hilweh, and Al-Ein.

They searched dozens of vehicles causing huge traffic jams, especially in the morning hours and at noon.

Policemen also ticketed dozens of drivers after searching their cars and inspecting them, while personnel of the revenue department inspected their files.

On Thursday evening, the army kidnapped three Palestinian youths in Silwan, including one who carried a West Bank ID card.

They were kidnapped at the military roadblock in Wadi Al-Rababa. The two have been identified as Sa’id Al-Tawil and Shihab Abu Rmeila.

Jawad Siyam, head of the Wadi Hilweh Information Center in Silwan reported that a similar campaign was carried out for a month in the Al-Esawiyya town, in East Jerusalem, adding that the army kidnapped dozens of residents, including women and children; four residents are still imprisoned.

Siyam stated that the arrests are arbitrary, without any cause or warrant, and that the army also broke into dozens of stores and homes, and repeatedly shutoff water pipes leaving the town without water.

Siyam also stated that the ongoing attacks are acts of collective punishment practiced against the residents, and that there is an Israeli special task force that repeatedly invades and attacks Jerusalem villages and towns that protest the ongoing Israeli settlement activities, the illegal confiscation of Palestinian lands and the ongoing arrests.

On Thursday evening, Israeli soldiers kidnapped two Palestinians in Silwan and took them to a nearby detention center. The two have been identified as Sa’id Tawil and Shihab Abu Rmeila.

In related news, the District Court in Jerusalem extended remand of several Palestinians, including a number of children.

Dozens of youths and children were kidnapped last month during repeated invasions and attacks carried out by the police in Silwan.