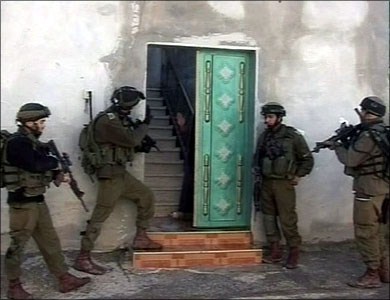 Israeli soldiers invaded, on Friday at dawn, several areas in the occupied West Bank and kidnapped four Palestinians in Bethlehem and Jenin; several Palestinians were injured in clashed with the army in Jenin.The army invaded the West Bank city of Bethlehem, broke into and searched several homes, and kidnapped two residents.

The two have been identified as Ahmad Khader Masalma, 20, and his brother Ismael, 19. They live in the Al-Fawaghra neighborhood in the city.

The two have been identified as Eyad Radi Fashafsha, 21, a student of the An-Najah University in Nablus, and Ma’moun Abdul-Jalil Hamamra, 27.

Palestinian security sources reported that the army forced several families, including children, out of their homes, and kept them in the cold for several hours while searching their property.

Clashes have been reported between the invading soldiers and dozens of local youths.
The army fired dozens of gas bombs; several residents were treated for the effects of tear gas inhalation.

Also, clashes continued in Ya’bod village, west of Jenin, for the second day, as the army invaded the village on Thursday at dawn, broke into and searched several homes, and occupied a home in Al-Malloul area in the village.

The soldiers brought military gear into the home, installed tents on its rooftop, and even placed sand sacks blocking its windows.

The home is located near the Ya’bod school, in an area that witnesses repeated clashes between the residents and the invading forces.

The army also installed several roadblocks in the village and at its entrances.

Furthermore, the army also invaded Al-Arqa nearby village, and occupied at home using it as a military post and a monitoring tower.

On Thursday evening, Israeli soldiers kidnapped two Palestinians in Silwan and took them to a nearby detention center. The two have been identified as Sa’id Tawil and Shihab Abu Rmeila.