Weekly Protest Against The Wall, Settlements, Held In Bil’in 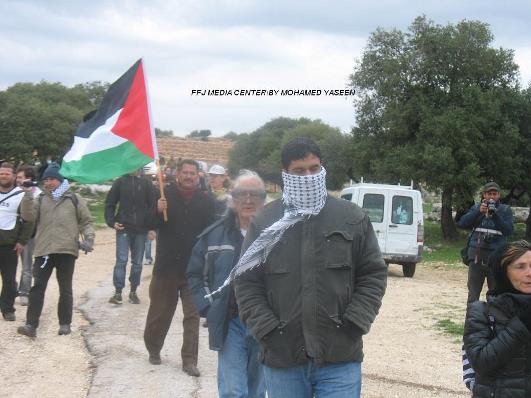 Friday February 1, 2013; Dozens of Palestinians, Israeli and International peace activists held their weekly nonviolent protest against the Israeli Annexation Wall and Israel’s illegal settlements in the village on Bil’in, near the central West Bank city of Ramallah; dozens were injured after being attacked by the army.Similar weekly protests were held in Kufur Qaddoum near Qalqilia, and Al-Ma’sara near Bethlehem. Several residents, including children, were injured, and one was kidnapped.

This week’s protest in Bil’in was named “The Friday of Solidarity with the Palestinian Detainees”, expressing support for the Palestinian political prisoners facing ongoing harassment and violations by Israel.

The protest started following Friday noon prayers at the village’s mosque in the center of the village, and the protesters marched carrying Palestinian flags and chanting slogans calling for national unity, for demolishing the Annexation Wall and for the liberation of the Palestinian prisoners, and the Palestinian lands.

As they arrived at the Abu Lemon natural reserve, the soldiers fired several gas bombs, concussion grenades, and rubber-coated metal bullets, and also sprayed them with water mixed with chemicals; dozens were injured and were treated by local medics.

Later on, violent clashed took place between the soldiers and local youths; the army fired more gas bombs, concussion grenades and rubber-coated metal bullets at several youths who hurled stones at them.

The Popular Committee Against the Wall denounced the Arab and international silence regarding what is happening to the Palestinian detainees held by Israel under conditions that violate International law, and called for expressing more solidarity with the detainees to ensure their release.

Furthermore, several residents, including seven Palestinian children, were injured in the village of Kufur Qaddoum village, near the northern West Bank city of Qalqilia, after the army fired tear gas and rubber-coated steel bullets at the villagers and their supporters who were holding their weekly protest.

The army also kidnapped one man and took him to a nearby military base.

One child was wounded in the Al-Ma’sara village, near Bethlehem, when the soldiers attacked protesters with rifle-buts and batons. Villagers said that the boy was hit by soldiers on his hand.

Several protesters managed to march to the settler road near the village, before the soldiers attacked them and forced them to leave the area.

The Palestinians hold weekly nonviolent protests in different parts of the occupied West Bank to express their rejection to the illegal Israeli Annexation Wall, Israel’s illegal settlements and its ongoing occupation, violations and assaults in Palestine.