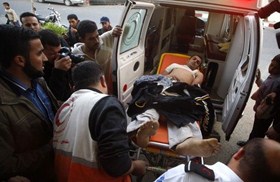 Palestinian medical sources reported, on Friday evening, that two Palestinian children have been injured by Israeli military fire, east of Jabalia, in the northern part of the Gaza Strip. Medics rushed to the scene and moved the two wounded children to the Al-Shifa hospital in Gaza city; the two suffered moderate injuries in their feet.

Israeli soldiers stationed at the border with the coastal region repeatedly open fire at Palestinian farmers and workers in Palestinian lands close to the border fence; dozens of casualties, including fatalities have been reported.

Four Palestinians have been killed, and more than 75 have been injured by Israeli military fire since the ceasefire took effect in Gaza on November 21, 2012.

The cease fire ended an 8-day war in November of last year during which Israeli missiles and shells killed 191 Palestinians, including children, women and elderly, while at least 1492 Palestinians have been injured, dozens seriously.

The Information Center of the Palestinian Ministry of Health Information reported that 48 children, including 16 under the age of five, have been killed by Israeli missiles and shells, in addition to 12 women and 20 elderly.

In its Weekly Report on Israeli Human Rights Violations in the Occupied Palestinian Territories for the week of 23- 30 January 2013, the Palestinian Center for Human Rights (PCHR) reported that a Palestinian woman was killed by Israeli forces north of Hebron, and a Palestinian child died of previous wounds he had sustained in ‘Ayda refugee camp, north of Bethlehem.

In January, the army shot and killed seven Palestinians, in the West Bank and the Gaza strip, and wounded dozens of residents in repeated attacks. Soldiers also kidnapped more than 300 residents.

The International Solidarity Foundation for Human Rights reported that the army shot and killed, in January, two children, a young woman and a young man in the West Bank, in addition to killing three Palestinians, including a child in the Gaza Strip.