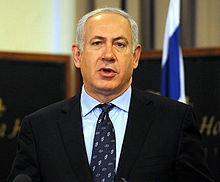 In his speech, Netanyahu called on Abu Mazin to return to the negotiation table, and claimed that his government “is committed to reaching a settlement to the conflict”.

He said that his government will be actively involved in what he called “the international efforts aimed at preventing Tehran from becoming a nuclear power”.

He also vowed to act on creating new employment opportunities, and to act on guaranteeing economic growth in the country.

Netanyahu added that “Israel is facing serious challenges, internally and externally”, and called on all Israeli political parties to join his government coalition.
As for the Palestinian file, Netanyahu said that he wants to hold negotiations with Abu Mazin, and urged him to return to the negotiation table “without preconditions”.

Israeli-Palestinian peace talks have been stalled since 2010 after a 9-month freeze on settlement construction and expansion activities ended, and Israel resumed the construction in the occupied territories on a large scale.

The Palestinians said that Israel must stop all of its settlement activities, and must end its violations and invasions in occupied Palestine before peace talks can
be resumed.

Israel said claims that the Palestinian demands are “preconditions”, and the Netanyahu government explicitly said it will build and expand Jewish settlements in the occupied West Bank, including in occupied East Jerusalem.

Settlements violate International Law and the Fourth Geneva convention, to which Israel is a signatory.