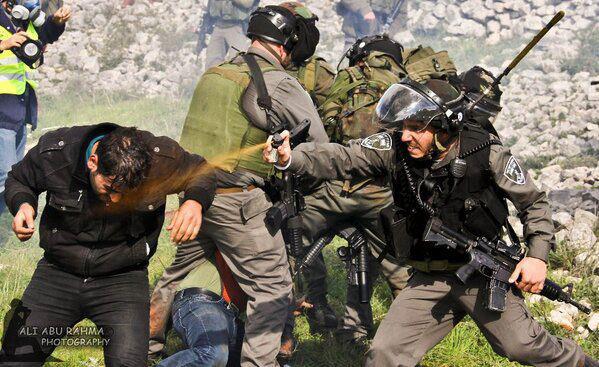 Dozens of nonviolent activists installed the protest camp on lands that belong to Palestinian villagers of Burin, in a move meant at protecting Palestinian lands and property, and to express rejection to Israel’s illegal settlement activities.

Dozens of soldiers and extremist Israeli settlers attacked the nonviolent protesters, and tried to remove them by force, eyewitnesses reported.

Medical sources said that at least twenty persons, including children, have been treated for the effects of tear gas inhalation, and due to being pepper-sprayed by the soldiers, while several residents have been injured by live rounds and rubber-coated metal bullets fired by the army, and were moved to local hospitals in Nablus.

Israeli media sources reported that two Israeli soldiers were mildly injured by stones thrown by some Palestinian youths during clashes that erupted with the army after the army attacked the nonviolent protesters.

Several families and their children were in the area visiting with family members and expressing solidarity with the nonviolent activists who installed their tents and established the new neighborhood on privately-owned Palestinians lands.

It is worth mentioning that the army was extensively deployed in the area, especially around Burin village, and installed roadblocks to prevent the residents from reaching the protest camp.

Activists said that this new neighborhood was established on Palestinian lands, in the occupied West Bank, as part of ongoing nonviolent activities against Israel’s illegal settlement activities in the West Bank, including in occupied Jerusalem.

In related news, Israeli soldiers violently attacked a nonviolent procession that was held in Kufur Qaddoum village, near the northern West Bank city of Qalqilia.

The residents marched to express solidarity with “Al-Manatheer Neighborhood” after the army attacked it, leading to several injuries.

Morad Eshtewy, media coordinator of the Nonviolent Committee Against the Wall and Settlements in Qalqilia, stated that the soldiers fired gas bombs at the protesters leading to several injuries, adding that a child was hit in the leg by a gas bomb fired by the soldiers, and was moved to a local hospital

Eshtewy added that the escalating Israeli attacks against the nonviolent protesters are a clear indication that these nonviolent activities are effective in exposing Israel’s crimes and violations.