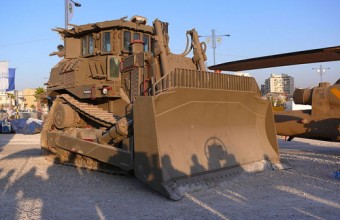 Tuesday, Feb. 5 2013; Israeli soldiers invaded the Al-Ashraqiyya area, in Beit Hanina in occupied East Jerusalem, and demolished a home for a Palestinian, leaving its members in the cold. Army to demolish 10 homes in the Jordan Valley.The Palestine News & Info Agency (WAFA) reported that several Israeli military jeeps and bulldozers of the Jerusalem Municipality invaded the area and demolished the shed under the pretext that it was installed without a permit.

The attack was carried out at dawn; the soldiers surrounded the shed and told the 6 family members that they have 10 minutes to leave the shed before the army demolishes it.

The family left it home, and the soldiers demolished it without allowing them to collect their belongings before demolishing it.

The property owner, Ibrahim al- Kiswani, told WAFA that he spent more than $160.000 in legal fees while trying to obtain a permit from the Jerusalem municipality for his 170-square-meters home, where he lives with his wife, and their four children between the ages of 8 and 22.

One of his children, aged 10, said that this is a very sad day for him, as the soldiers demolished his family’s home without giving them a chance to collect their belongings, including their clothes and a computer he used to school homework.

Also on Tuesday, Israeli soldiers handed 10 Palestinian families in the Northern Plains area of the West Bank, military orders informing them that the army intends to demolish their homes.

Aref Daraghma, head of the local council of Wadi Al-Maleh area and the Bedouin Tribes, stated that the army intends to remove the residents, their tents and structures, in Al-Hammamat and Ein Al-Hilwa areas.

Daraghma added that these orders are similar to orders that were handed to the residents a month ago, when the army demolished several structures and removed tents used by the residents who are Bedouins shepherds living in Al- Hammamat, and Al-Meeta areas in Wadi Al-Maleh.

He said that several more families will be left in the cold should Israel implement its plan. The army repeatedly removes the residents in Wadi Al-Maleh, and frequently uses the area as a military training zone.

On Monday, personnel of Jerusalem Municipality invaded the As-Sowwana area, in occupied East Jerusalem, placed notices on the doors of a 16-story apartment building, home to more than 80 Palestinians.

The notices claim that the building was constructed without a construction permit, and did not contain a specific deadline.

In Anata, northeast of occupied East Jerusalem, the army handed 20 notices informing the residents that their houses, stores and cattle sheds will be demolished; the residents were informed that they have until February 19 to file appeals, PNN said.

The residents said that the army and the Jerusalem City Council intend to confiscate the lands and demolish the Palestinian property to expand the nearby illegal settlements.

On January 19, Israeli soldiers imposed a strict siege on the northern plains area, and installed several roadblocks on main roads in the area.

Eyewitnesses reported that the army closed the Al-Hamra and Tayaseer roadblocks, installed several roadblocks on main roads linking between different Palestinian towns and villages in the area, and on main junctions.

The siege was imposed after the army demolished several structures and tents that belong to Palestinian shepherds.

Shepherds communes in the area have been targeted dozens of times, including several attacks carried out against them in the last few months rendering entire families of Bedouins and Shepherds homeless.

Thousands of Palestinians have been displaced and repeatedly removed from the area since Israel occupied the West Bank in 1967.

Israel also demolished dozens of entire villages inhabited by Bedouins and shepherds as it does not recognize their communes and even their residency status in the occupied Palestinian territory.