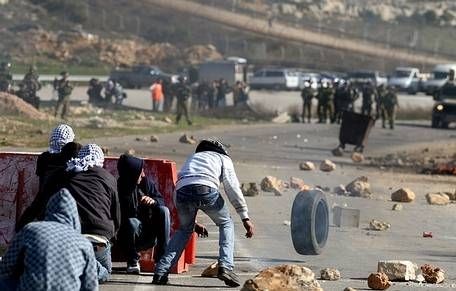 Israeli soldiers invaded, on Thursday afternoon, the schools area in the village of Ya’bod, south of the northern West Bank city of Jenin, clashed with dozens of school students, and fired round of live ammunition, gas bombs and rubber-coated metal bullets. Injuries were reported.Eyewitnesses reported that at least 10 students have been treated for the effects of teargas inhalation after the soldiers fired dozens of gas bombs into school yards in the area.

The attack led to clashes between dozens of students and the invading Israeli soldiers; the students hurled stones and empty bottles at the soldiers who fired rounds of live ammunition, gas bombs and rubber-coated metal bullets.

Furthermore, eyewitnesses reported that the army installed a roadblock at the eastern entrance of the village, stopped and harassed dozens of residents.
The soldiers installed the roadblocks after a number of extremist Israeli settlers invaded Al-Hafeera area in the city.

In related news, the army kidnapped one Palestinian youth, identified as Sameh Jamal Al-Qitt, 19, after the soldiers invaded an area close to the Salem Israeli military base, north of Jenin city.

The youth was cuffed and blindfolded before being taken to an unknown destination. He is a resident of the Eastern Neighborhood in Jenin.

In Ramallah, Israeli military sources claimed that two Israeli soldiers have been mildly inured during clashes that took place between the soldiers and the residents after the army invaded Budrus village, west of the city.

The army invaded the village through the western gate of the Annexation Wall, and harassed dozens of residents leading to clashes.

The village witnesses repeated invasion due to its nonviolent activities against the Annexation Wall and settlements.