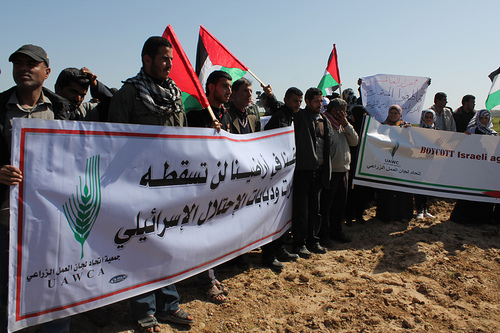 Palestinian farming organisations and campaigners in more than 40 European cities today held demonstrations calling for governments and supermarkets to end trade with Israeli agricultural export companies over their role in the destruction of Palestinian agriculture.

Farmers and fishermen in Gaza have been holding demonstrations throughout the week and more than 300 people today marched towards the buffer zone near the border with Israel, where regular attacks and incursions by the Israeli military force farmers to abandon their land or take huge risks to tend to their crops.

“The daily aggression suffered by Palestinian farmers every day must be highlighted to the world, so people can understand the reality of the attacks and the suffering that has continued throughout the recent ‘ceasefire’,” explained Mustapha Arafat, a farmer from Zeitoun, Gaza City.

“The boycotts of Israeli agriculture companies are so important as the Israeli occupation has destroyed our farming production and denied us the possibility of exporting our own products. International pressure on Israel is the only way our own economy will be allowed to develop and for us to live normal lives,” he added

All of the main Palestinian farming organisations this morning issued a statement urging international civil society to take action against Israeli agriculture companies.

An accompanying briefing document details how the sale of Israeli fresh produce exports in European supermarkets directly contributes to violations of international law and human rights.

In Europe, many of the 40 protests that took place targeted Mehadrin, a large Israeli export company that supplies citrus fruits, dates and other fresh produce to supermarkets across Europe.

The company operates in illegal Israeli settlements, is involved in the theft of Palestinian land and water and employs Palestinian workers forced to work in illegal settlements in unsafe conditions for as little as €11 per day.

“Israeli agriculture companies such as Mehadrin and Hadaklaim profit from the siege on Gaza and grow crops for export to European supermarkets in illegal settlements on land from which Palestinian farmers have been forcibly removed,” said Dr. Taha Rifae, director of the grassroots department at the Union of Agricultural Work Committees.

Actions have also been taking place in the West Bank, culminating on a conference on building the boycott of Israeli agriculture on Monday in Salfit.

“Agriculture is a vital part of our economy and national heritage but it is being systematically destroyed and these companies are the primary beneficiaries. By trading with companies such as Mehadrin, European supermarkets are financing the dispossession of Palestinian farmers,” Rifae added.

A large demonstration was held outside Mehadrin’s Swiss distribution centre this afternoon and the company was protested as it participated in a major fresh produce show in Berlin.

In France, activists occupied the customs office in southern French city Montpellier to protest the nearby port of Sète being used to import produce from Israeli companies such as Mehadrin that operate in illegal Israeli settlements. More than 50 campaigners occupied the offices for more than an hour.

Protests were also held at supermarkets in more than 14 other French cities and in Italy, Belgium, Luxembourg, Sweden, Germany, Switzerland and the Netherlands.
In the UK, campaigners picketed more than 35 stores of major supermarket Sainsbury’s as part of a new campaign aimed at pressuring it to cut its ties with Mehadrin and EDOM, another Israeli company operating in settlements.

The UK’s fifth biggest supermarket The Co-Operative Group last year announced it would no longer source products from any supplier that operates in illegal settlements and cut ties to four Israeli companies following pressure from its members.

A British businessman yesterday announced he would resign as chair and sells his shares in Israeli settlement exporter EDOM following concerns raised by campaigners.

“Governments and supermarkets should take action to end trade with companies which is in effect financing Israeli violations of international law. European governments talk tough on settlements but allow supermarkets to support their expansion,” said Rifae.