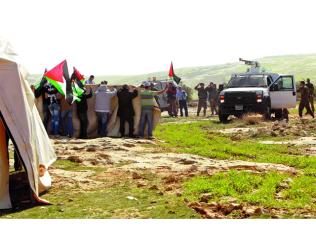 Saturday morning February 9; Israeli soldiers invaded and dismantled the Canaan protest village, east of Yatta town, near Hebron, that was installed by local nonviolent activists on Palestinian lands that Israel illegally confiscated for its settlement construction and expansion activities.The soldiers declared the area a closed military zone after surrounding it, proceeded to attack the residents, and removed their tents.

Younis Araar, coordinator of the Nonviolent Committee Against the Wall and Settlements in the southern part of the West Bank, reported that dozens of soldiers attacked nearly 30 nonviolent activists who installed tents in the area located between Al-Baraka and At-Tawana area, and dismantled the protest village.

The soldiers invaded the Bab Al-Karama on Monday at dawn – January 21, used excessive force against the nonviolent peace activists, and demolished the protest village.

On January 15, Thousands of Israeli soldiers and policemen attacked the Bab Al-Shams Palestinian village, installed east of in occupied East Jerusalem, and forcibly removed dozens of activists loading them onto buses.

At least 11 nonviolent peace activists, and 7 reporters, have been injured when the soldiers attacked a group of activists trying to reach the Bab Al-Shams.

Last week, Israeli soldiers used force in removing another Palestinian protest village that was installed on Palestinian lands in Burin, in the northern part of the occupied West Bank.