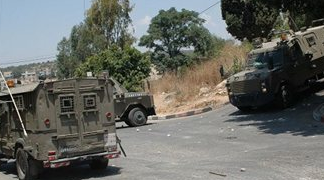 Israeli soldiers surrounded, on Saturday at night, Azzoun town, east of the northern West Bank district of Qalqilia, and fired dozens of gas bombs at local residents.The army surrounded the village after a group of extremist Israeli settlers attempted to invade it from the eastern side.

Medical sources reported that dozens of residents were treated for the effects of tear gas inhalation after the soldiers attacked them when they tried to prevent the settlers from invading their village.

The army also warned the residents that the soldiers will be invading their village, apparently to conduct arrests, should they fail to leave the area.

Hundreds of residents gathered at all entrances of the village after the settlers attempted to invade it, local sources reported.

In related news, Israeli soldiers kidnapped four Palestinians in the Hebron district, in the southern part of the West Bank.

Three of them were kidnapped, on Saturday morning, in the Canaan village, that was installed by nonviolent activists on Palestinian lands that belong to the residents of Yatta.

The fourth resident was kidnapped from his home in Yatta after the soldiers invaded his property, and searched it causing excessive damage.