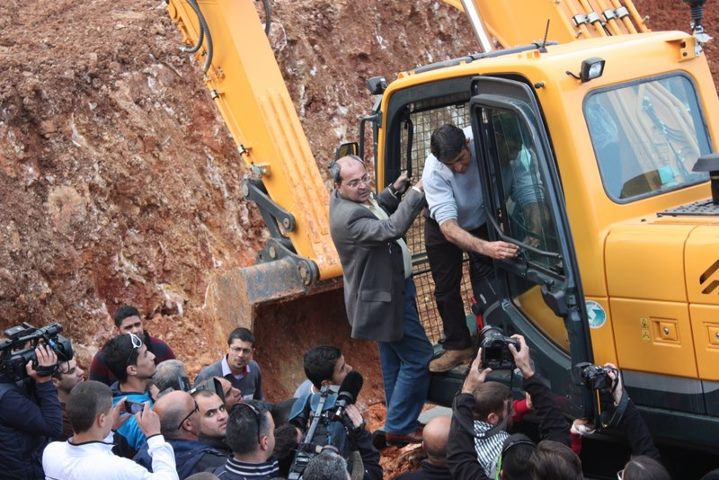 Sunday February 10; Israeli soldiers and policemen violently attacked a nonviolent protest against a settlement road being built on Palestinian lands in Beit Safafa town, in occupied Easy Jerusalem. Two Palestinians have been kidnapped and at least two others have been wounded.Dozens of residents, including Arab member of Knesset Dr. Ahmad Tibi, participated in the protest and formed human chains in an attempt to stop the bulldozers from uprooting and bulldozing the lands for the construction of the settlement road dubbed as “Road 4”.

Dr. Tibi said that Beit Safafa is facing a renewed assault by Israel, and that the Israeli government only wants to serve the settlers and build roads for them at the expense of the Palestinians in Beit Safafa, and in the rest of occupied Jerusalem.

Dr. Tibi added that the residents of Beit Safafa are being targeted, once again, and losing more lands while the Israeli government continues to neglect them and their rights, and refuses to provide them with the needed services.

Engineer Abdul-Karim Lafi, member of the Engineering Committee in Beit Safafa, stated that the residents reject the Israeli plan that aims at the illegal confiscation of 250 Dunams of their lands for the benefit of an 80-meter settler highway that extends for 1600 meters.

Beit Safafa resident, Majida Sobhi, stated that Israel started working on the new road approximately 5 months ago, and that, when completed, the residents will start facing further difficulties as they will have to take alternate extended bypass roads whenever they enter or leave the town especially since this new highway will split their town.