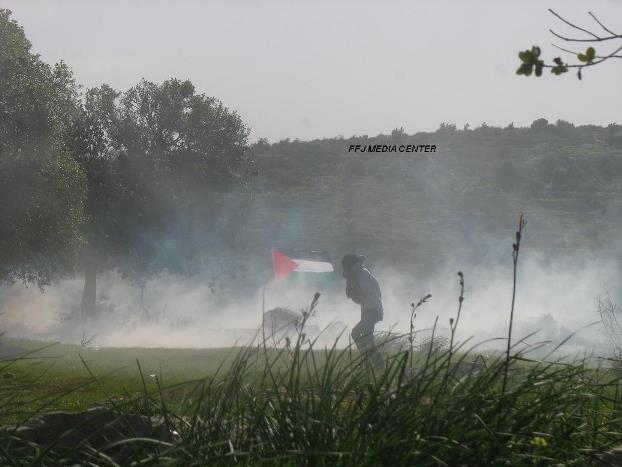 Dozens of Palestinians have been treated for the effects of tear-gas inhalation during the weekly nonviolent protest against the Wall and settlements in Bil’in village, near the central West Bank city of Ramallah.Injuries were also reported in Nil’in and Nabi Saleh villages near Ramallah, Al-Ma’sara near Bethlehem and Kufur Qaddoum near Qalqilia.

The Popular Committee Against the Wall in Bil’in reported that this week’s protest was dedicated to the Palestinian political prisoners held by Israel, especially those who are holding extended hunger strikes.

Dozens of Israeli and International peace activists participated in the protest along with the locals who chanted for the removal of the illegal Israeli wall, the removal of Israel’s illegal settlements, and called for real solidarity with the detainees facing ongoing violations in Israeli prisons.

As the protesters reach the Abu Lemon area, some protesters managed to remove some of the barbwire fence, just before the concrete Annexation Wall, and the soldiers fired dozens of gas bombs and rubber-coated metal bullets leading to several injuries.

Clashes were reported between the soldiers and dozens of Palestinian youths who hurled stones at the army for attacking the nonviolent protest.

The Popular Committee Against the Wall in Bil’in reported that this week’s strike comes in solidarity with all hunger striking Palestinian detainees, especially Samer Al-Eesawy who has been striking since 207 days, in addition to detainees Ayman SHarawna, Tareq Qa’daan, Ja’far Ez Ed-Deen, and Yousef Sha’baan.

In related news, Israeli soldiers attacked nonviolent protesters in the nearby villages of Ni’lin and Nabi Saleh, in addition to attacking protesters in Al-Ma’sara village near Bethlehem and Kufur Qaddoum near the northern West Bank city of Qalqilia.

Dozens of residents have been injuries mainly due to inhaling gas fired by the army.