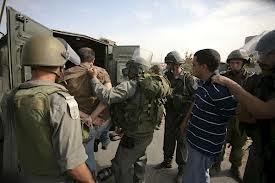 Israeli soldiers kidnapped, on Friday evening, seven Palestinians during clashes that took place after the army invaded Be’er Ayyoub neighborhood, in Silwan, south of the Al-Aqsa Mosque in occupied East Jerusalem.Local sources reported that the army broke into and searched several homes that belong to the Al-Rweidy, Al-Rajaby, and Shweiky families, and attacked three women of Al-Rweidy family causing minor injuries and panic among the children.

The sources said that the kidnapped residents have been identified as Ahmad Rweidy, 19, his brothers Khader, 28, and Kanaan, 26, their relative Haider Rweidy, 35, Younis Shweiky, Ziad Al-Rajaby, and Mohammad Al-Rajaby.

Three more residents, identified as Waseem Bader, ‘Aaed and Ahmad Al-Abbasy were handed warrants to head to the Police station in the area for questioning.

In related news, the army kidnapped a Palestinian at a military roadblock near Jenin, in the northern part of the occupied West Bank.

On Thursday, the army kidnapped one resident in Beit Ummar, north of the southern West Bank city of Hebron, and installed a roadblock at the entrance of the Al-Fawwar refugee camp, south of the city. Soldiers stopped and searched Palestinian vehicles and interrogated dozens of residents.