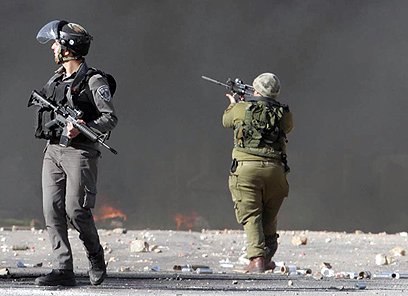 Friday February 15; Palestinian medical sources reported that dozens of Palestinians have been treated for the effects of tear gas inhalation after the Israeli army attacked protesters as they were holding a nonviolent protest in front of the Ofer Israeli prison, near the central West Bank city of Ramallah. The protesters also held Friday noon prayers in front of the prison as part of a solidarity campaign in support of Palestinian detainees held by Israel, especially those who are holding open-ended hunger strikes demanding their release.

Detainee Samer Al-Eesawy started his strike 206 days ago, and has only been drinking water since January, after he stopped talking vitamins and medications.

Palestinian Minister of Detainees, Issa Qaraqe, stated that Al-Eesawy suffers a sharp pain in his kidneys, lost sensation in parts of his body, and also lost 35 kilograms.

It is worth mentioning that Arab Member of Knesset (MK) Ahmad Tibi, attended the protest and stated that Israel’s occupation will be held accountable for the death of any striking detainee.

He said that ‘the entire region would burn should a Palestinian detainee die in Israeli prisons’.

Massive protests were also held in Hebron, in the southern part of the West Bank, in Ramallah in central West Bank, at the Al-Jalama crossing, north of the northern West Bank city of Jenin and at the Qalandia terminal between Ramallah and occupied Jerusalem.

Violent clashes were reported after Israeli soldiers attacked the protesters with gas bombs, rubber-coated metal bullets and concussion grenades; dozens of residents have been injured.

Clashes were also reported in the Aida Refugee Camp, in Bethlehem, as dozens of Palestinian youths hurled stones and empty bottles at Israeli soldiers stationed at military towers overlooking at the camp.

The soldiers fired rubber-coated metal bullets and dozens of gas bombs, some hitting local homes leading to dozens of injuries among the residents.

On Friday evening, clashes were reported at the Huwwara roadblock, south of the northern West Bank city of Nablus, and the army kidnapped two Palestinian youths.

Furthermore, Palestinian President, Mahmoud Abbas, attended a protest that was held in Al-Biereh town, near the central West Bank city of Ramallah, and called on Israel to release all Palestinian political prisoners.

Abbas said that the release of all political prisoners is a priority for the Palestinian Authority.